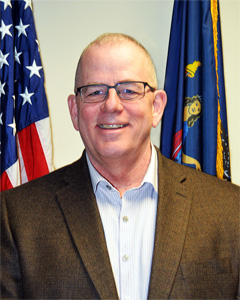 Patrick Center is a retired Army National Guard Brigadier General with nearly 40 years of service. He was named as Special Assist, State in November 2018.

In this role Center is responsible to the Adjutant General for overseeing and coordinating the state agency operations of the Division of Military and Naval Affairs.

Prior to his retirement from the Army National Guard in August of 2018, Center served as Director of Joint Staff, responsible for coordinating New York Military Forces during domestic response operations and overseeing joint Army and Air National Guard activities.

Center, a Charleton, N.Y. resident, was a federal employee working full-time for the National Guard throughout his military career.

He also served as the Deputy Officer in Charge of the United States Property and Fiscal Operations Office for New York and as executive officer for the Adjutant General of New York.

Center served as Director of Logistics when the Guard responded to storms in 2011 and Superstorm Sandy in 2012. Troops under his direction pumped half a million gallons of fuel to local government vehicles, moved critical supplies across the state, and managed a logistics support area for 2,500 troops.

Center is a graduate of the U.S. Army War College and Nyack College and has a National Security Management Certificate from Syracuse University's Maxwell School.