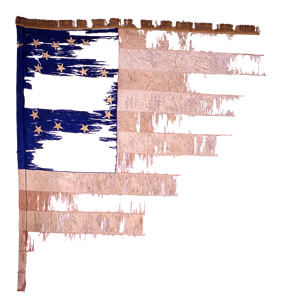 Less than 50% remains of this faded, silk national color carried by the 72nd Regiment New York Volunteer Infantry, or “Third Excelsior.” Organized by Colonel Nelson Taylor, the regiment is known to have received at least two national colors, both from the City of New York; one in April 1863, and another in April 1864. The flag seen here, possibly one of the two national colors from New York City, suffered from poor storage while furled on is staff for nearly 150 years. (2008.0188)