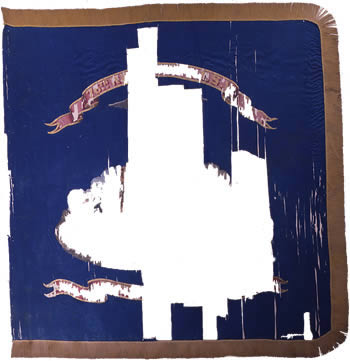 S.R. Campbell, on behalf of his mother, Mrs. Samuel Campbell of New York Mills, presented a stand of colors, believed to have included this flag, to the 76th Regiment at the New York State Capitol on January 17, 1862. John Cook, colonel of the regiment who assumed command at Gettysburg on July 1, deposited this flag with the state in 1870. Early attempts at preservation, stitching to repair damage caused by both battle and poor storage/exhibition conditions, were removed in 2003 so that the flag fabric could be realigned. (02.125)