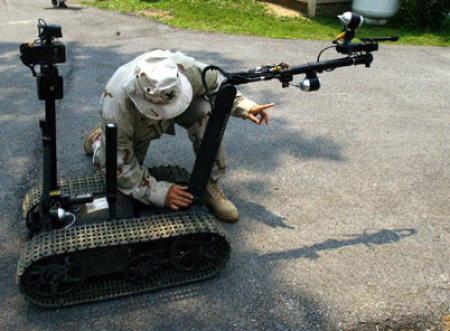 “We are getting briefed about the latest IED information from various countries and the newest situations that Soldiers should be aware of before they deploy.” said Command Sgt. Maj. Ken Church, 501st EOD Battalion. “However, during our first week of training, our basic combat training ranged from land navigation to entering and clearing a room.”

According to Major Robert Mitchell, the acting battalion commander, the 501st EOD training is exceeding his expectations because of the quality of training being provided by the 111th EOD Group from the Alabama Army National Guard.

“The 111th is our training readiness oversight headquarters. They have brought a tremendous amount of resources and expertise to our annual training.” said Mitchell. “They are giving us world class OC’s (observer-controllers) that have deployment experience that enables them to give our teams immediate feed back as they prosecute IED problems.”

The 111th EOD Grp. is the only National Guard EOD Group in the nation.

“The New York Army National Guardsmen were extremely successful in their EOD training,” said Capt. William Dickinson, battalion operations officer, 441st EOD Bn., 111th EOD Grp. “They started out in the crawl mode and quickly moved to the run mode. We were able to identify weaknesses for them to work on before the next annual training cycle.”

The 111th came to conduct annual training at Camp Smith for the first time because the 501st is a newly formed New York National Guard unit.

In addition to the 45 New York Army National Guardsmen at Camp Smith, there were approximately 115 Guardsmen from Massachusetts, West Virginia, Florida and Georgia participating in the EOD training.