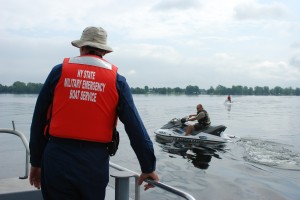 For the second year, the New York Naval Militia teamed up with the United States Border Patrol in July to enforce customs inspections where Lake Champlain changes from American to Canadian. In a multi-agency operation consisting of federal, state and local law enforcement, the Naval Militia ensured that all vessels moving from Quebec to the United States stop and check in with customs. They made contact with U.S. bound vessels as they crossed the Canadian Border and directed them to the customs point approximately 500 Meters after they cross the border

The operation couldn’t happen without the Naval Militia, said Border Patrol Agent Mike Cisco. Sometimes during the height of the season, 100-150 vessels could pass through the point on a given day and having the additional boat makes it easier to ensure all vessels stop, he explained.

“The members of the New York Naval Militia continue to be a strong partner and have been a great force multiplier for the U S Border Patrol. Their expertise and professionalism during Operation Lake Champlain has allowed us to reallocate our agents to other parts of the lake and provide increased border security in our area of operations," said Swanton Sector Chief Patrol Agent, Daniel B. Doty

U.S. Customs and the Border Patrol conducted inspections at the designated inspection port just before the bridge the crosses Lake Champlain from New York to Vermont. The operation also involved the New York State Police and the local Sheriff’s department.

According to Agent Cisco, prior to the opening of the customs point on the lake , there was an honor system, in which vessels were required to report they had crossed and customs would come down to inspect the vessel. The problem was very few vessels would report that they had crossed.

The Border Patrol has always sought to inspect vessels entering the United States, but the construction of the inspection station has made enforcement more effective, said Border Patrol Agent Mark Henry, spokesman for the Swanton District of the Border Patrol.

“A lot of boats see us, turn around and go back,” said Ryan, a Coeys resident. At times, Ryan added, the crew had to “chase down” boats and guide them into the customs station.

Since the Naval Militia has no law enforcement authority, in threatening situations they would call the Border Patrol for assistance, Ryan explained.

The two-man crew of PB280 handled all the maintenance on the boat themselves, which normally meant spending 30 minutes prepping each day before operations, said Petty Officer Garret Aldershoff, a Scotia resident.