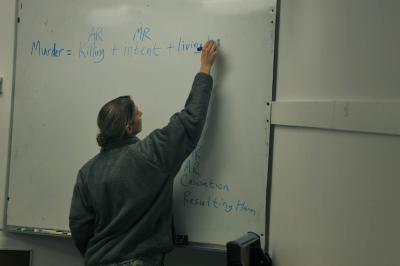 CAMP BONDSTEEL, Kosovo-- New York Army National Guard Capt. Elizabeth Ramsey, of New York City, leads a discussion during a mock trail held as part of the Fundamentals of Criminal Law college class she teaches at the Laura Bush Education Center. Ramsey, a logistics officer in the 369th Sustainment Brigade and a public defender in Elizabeth, N.J., has deployed to Kosovo for a year as part of Mulit-National Task Force East. (Photo by Spec. Joshua Dodds, 116th Public Affairs Detachment)

Ramsey, a Manhattan resident who volunteered to deploy here as Trial Defense Service Attorney for Multi-National Task Force East, is teaching a class in Fundamentals of Criminal Law through Central Texas College which is offered at the Laura Bush Education Center. Next semester she’ll teach Court Systems and Practice and Legal Aspects of the Law.

“My ultimate career goal is to become a law professor so when I head that Central Texas College and the University of Maryland needed adjunct instructors I quickly put my application in to get experience,” Ramsey explained by e-mail.

“I was a teaching assistant in law school, but that is the extent of my teaching experience,” said.

University of Maryland College-Europe and Central Texas College (CTC) are the two institutions from which Soldiers can take classes during their off time here. Other colleges and universities also are available through on-line distance-learning courses.

The structure and stability of the NATO peace-support mission in Kosovo makes getting an education while deployed a hard option to pass up for U.S. Soldiers stationed here.

At last count, about 400 uniformed men and women in Multi-National Task Force-East were filling classrooms after hours and on weekends, taking full advantage of college-credit opportunities for personal and professional growth.

The Laura Bush Education Center on Camp Bondsteel has provided thousands of Soldiers with these services since its start in 2000.

Ramsey, recently put her class of a dozen students to work using their acquired knowledge to the test in a mock ―court trial on Camp Bondsteel.

“This trial was a good exercise where they showed themselves what they learned in the class, and also to have some fun while getting to know each other better,” Ramsey said. Throughout the course, students participate in more than one trial as members of either the defense or prosecution. The juries are made up of volunteer Soldiers from throughout Camp Bondsteel.

“The students were given a scenario and a list of 10 witnesses who they had to interview,” Ramsey said.

The students were told that an alleged assault with a deadly weapon occurred, but that the defendant may raise the defense of self-defense at trial. The prosecutors for the first trial were Spc. James V. Mann, Menifee, Calif., 1-144th Maneuver Task Force, and Master Sgt. Louis Suchon, Mosinee, Wis., Task Force Falcon Medical.

“I am previous law enforcement, so it is interesting to see how it works in the court after we arrest someone,” Mann said. “I think I put what I learned in class to good use. Captain Ramsey is a great teacher and we learned a lot from her.”

Ramsey, whose year-long deployment will end in August, said she’s honored to be teaching the Soldiers who take her classes.

“These Soldiers have to balance military duties, staying in touch with family back home, and everyday responsibilities with numerous college courses while deployed,” she said.

“I believe it is important not only to encourage them to continue their education, but also important to provide the means for which they can achieve their future career goals,” she added.

Getting Soldiers to think about their civilian or military career goals is an important service that the education center offer said, said Laura L. Greenfield, of Starkville, Miss., the Camp Bondsteel education service officer

“Once they establish a goal, I explain what the two colleges we have here can provide the Soldier,” she said.,

Greenfield has worked in the education field for the past five years, the last six months at the center here.

The classes are scheduled during evenings and weekends to accommodate Soldiers and not interfere with their duty day.

“I just think it is amazing to see all five of our classes full on a Friday night,” Greenfield said.

“I challenge the Soldiers of MNTF-E to use their time wisely and to make a commitment to themselves and to return from this deployment better educated, civilian-wise and military-wise, than when they deployed,” he said.

“Do not re-deploy back home regretting that you did not take advantage of the opportunities that you had available,” Cripe added.

Throughout the next seven months, several more classes will be offered at the education center, ensuring that any Soldier who enrolls will not have any educational regrets.