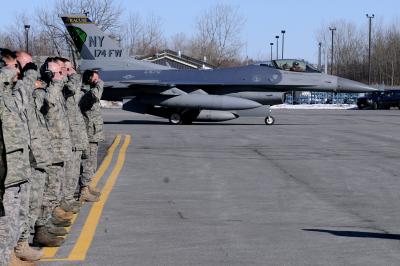 Syracuse, NY--Airmen of the New York Air National Guard’s 174th Fighter Wing salute as Col Kevin Bradley, the Wing Commander, leaves on his final flight in an F-16C from Hancock Field Air National Guard Base here. The last two F-16s flown by Bradley and Lt. Col. Dan Tester, left Hancock Field during an emotional ceremony on Saturday March 6, watched by 2,000 members of the wing, their friends and family. The 174th , whose pilots logged more than 70,000 hours in the F-16, and have flown fighters for 63 years, is now operating the MQ-9 Reaper remotely piloted aircraft in combat patrols over Afghanistan Photo by Staff Sgt James N. Faso II, 174th Fighter Wing

The 174th’s Wing Commander, Col. Kevin Bradley, and his wingman Lt. Col. Dan Tester took off on the final flight at 3:15 p.m., marking the climax of the emotional sendoff ceremony that ended 63-years of fighter operations at the base. Tester was the first to takeoff, followed moments later by Bradley. They made three passes over the facility, including a pass over the assembled group which had spilled onto the ramp area outside the hangar.

Brig. Gen. Patrick Murphy, the Adjutant General of New York, reminded the Airmen and their families that the event was a celebration of the 174th’s future.

“Today should not be a moment of sadness as I have spoken to Air Force and Air National Guard Leaders about the dwindling piloted aircraft. Thanks to your leadership this unit is one of the most if not the most current unit in the Air National Guard with these Unmanned Aerial Vehicles,” Murphy said.

“The F-16 has been an outstanding aircraft for the unit, but it is just a machine. It has been the airmen of the 174th Fighter Wing that has made up this mission since 1988 and will continue to do so into the future,” Bradley told the group.

While Bradley and Tester prepared to take off the crowd witnessed the cutting of the F-16 farewell cake. This was immediately followed by a rousing F-16 sendoff video that was produced by the 174FW Visual Information Office. After Bradley and Tester completed their final pass overhead they headed north to the 174thForward Operating Location on Wheeler-Sack Army Air Field located at Ft. Drum. The airspace over Fort Drum has served as the training space for the 174th for many years as well as other aircraft from all over the Northeast. It will continue to be utilized by other units for their training requirements as well as the unit’s new MQ-9 mission in the future.

When Bradley and Tester landed they were greeted by family, friends and unit members who congratulated them on their final flight, as well as their part in the end of an era. The 174FW has been flying the F-16 Fighting Falcon since 1988, amassing more than 70,000 flying hours, and has flown jet aircraft for more than 60 years. The wing began flying MQ-9 Reaper combat patrols over Afghanistan in 2009 and also operates an MQ-9 maintenance training school for the Air Force.