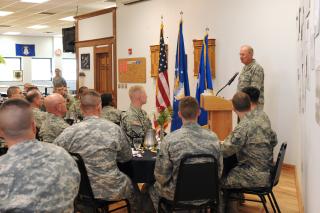 General Craig R. McKinley, the Chief of the National Guard Bureau, arrived at Syracuse University this week as a guest speaker at the National Security Management Course. While in Central New York, he had an opportunity to meet with three major commands of the New York National Guard in the region -- the 174th Fighter Wing, the Eastern Air Defense Sector and the 27th Infantry Brigade Combat Team Headquarters.

After returning to Hancock Field after his speaking engagement, McKinley toured the MQ-9 Operations building, the site from which 174th pilots and sensor operators today fly combat air patrol missions using the MQ-9 Reaper, a remotely piloted aircraft. The air wing recently transformed from flying F-16 Fighting Falcons when the last two fighter aircraft left the base on March 6.

"I want to thank the instructors at the Field Training Detachment for their hard work," McKinley said after reviewing the extensive maintenance training support for the entire Air Force MQ-9 force. The Field Training Detachment began graduating new maintenance operators in September last year. The National Guard Bureau Chief also expressed how proud he was of the Soldiers and Airmen that make up the New York National Guard.

Colonel Harvey VanWie, commander of the 174th Fighter Wing Mission Support Group and acting Wing commander for the day then hosted McKinley for a luncheon with approximately 50 Soldiers and Airmen at the Hancock Field Heritage Club.

"Just having the Airmen and Soldiers at this table, I can see that this organization is well run, well led, and has very motivated and dedicated people," McKinley told the assembled troops.

After concluding his visit to Hancock Field, McKinley visited the headquarters of the New York Army National Guard’s 27th Infantry Brigade Combat Team whose armory is located on the air base. The brigade returned from deployment to Afghanistan about 15 months ago and completed the state’s Soldier and family reintegration program last year.

"I can report today that the folks who live and work in Syracuse are doing a great job," McKinley said, "whether they be Army or Air National Guard."

He then exited via helicopter to Rome, N.Y. where the Eastern Air Defense Sector conducts operations at the Griffiss Business and Technology Park before returning to Washington, D.C.