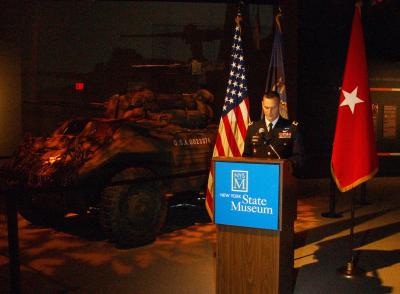 Pvt. Nathan Brown was killed instantly, another Soldier was seriously wounded, and Landry, a Saratoga Springs native, and other members of Company C 2nd Battalion 108th Infantry found themselves in the middle of a tremendous firefight.

More than six years later, on Thursday, May 27; Staff Sgt. Robert Landry looked at an exhibit in the New York State Museum titled “The Battle of Easter Sunday”, highlighting the history of that day, and Nat Brown’s death, and remembered.

“While we were serving in Iraq we knew we put ourselves in the history books, but to let the community and let everyone else see a visual picture of what happened over there is huge,” Landry said. “It’s surreal.”

The exhibit outlines the history of the New York Army National Guard in the Spanish American War, World War I, World War II, Desert Storm, 9/11 and the wars in Iraq and Afghanistan, as well as in responding to domestic emergencies throughout the 20th Century.

The museum had initially planned on doing a small National Guard display to coincide with Memorial Day, said Museum Director Clifford Siegfried. But as his curators and researchers dug into the Guard stories the exhibit turned into one of the largest temporary exhibits the museum has ever mounted, Siegfried said.

There was tremendous staff enthusiasm for the project, Siegfried said. The staff worked on weekends to put the display together and it was finished ahead of time. In the museum world, those are sure indicators that the staff is involved and excited, he explained.

“We think this is one of our best exhibits ever,” Siegfried said. “This exhibition tells the story of how New Yorkers have taken on the responsibility to protect and to serve New York and our nation throughout our history from the Militiamen who were vital protection on the colonial frontier to the present day service in wars around the world and domestic disasters.”

The goal is to have a serious of programs and events on the military and the New York National Guard throughout the year until the exhibit closes in March 2011, he said.

“The exhibit itself draws you in,” he said. A World War II light armored car loaned by a private collector, colorful display panels and photographs, and uniforms and equipment from throughout the 20th Century and today’s wars are featured.

Visitors will be able to learn about the legacy of the National Guard, and he’s hopeful that Guard members and their families will come from across the state to see the display, Murphy said,

“We appreciate being part of it and it has been a labor of love for many of our folks as well,” he added.

Sergeant First Class Luis Barsallo, from Waterford, donated his Arabic phrase book, combat pack, worn desert boots, and the teddy bear his daughter sent him while served in Samarra in 2004 to the museum, along with photographs.

“It is an honor and privilege to be a part of history and to be in a museum with all the other Soldiers,” he said. “Some of the items bring back memories; my boots, the translation book.”

“It was exciting to give something to help the display and explain some of the experiences we have gone through in the past, not just as Charlie Company 2-108th but as the National Guard history,” Barsallo said.

“I think it’s a great tribute,” Landry said. “We put our stamp in the history book, without a doubt.”