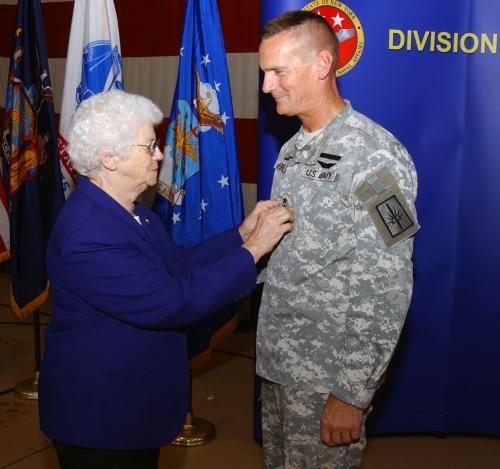 JOINT FORCE HEADQUARTERS, LATHAM, N.Y. (08/13/2010)(readMedia)-- Patrick Murphy, the Adjutant General of New York who commands the 20,000 men and women of New York’s Military Forces, pinned on his second star to reflect the rank of Major General during a short ceremony here this morning.

Murphy’s wife Cherie and his mother Carolyn, of Dike, Iowa, joined to pin on his new rank of major general, in front of the senior joint staff and Guardsmen and women. Murphy is a resident of Malta.

"It was with great pleasure that I selected Pat Murphy to serve as Adjutant General and he now wears the well-deserved rank of Major General," Paterson said. "He is the right man to lead the 16,000 men and women of the New York National Guard in serving the people of our great state."

By law the 54 adjutants generals of the states and territories are entitled to two-star Major General’s rank. Paterson nominated Murphy for his promotion to major general as the Adjutant General in accordance with New York State military law. The state promotion was confirmed by the New York State Senate and will be followed by federal recognition through a similar confirmation process in the Senate.

"For many years, I have had the privilege to pin new rank on our leaders and Soldiers in the force," Murphy said. "Promotions have always been a mark not of past achievements, but of future potential and expectations. I’m honored that my career with the New York National Guard gives me the opportunity to continue to lead such terrific men and women in uniform."

Murphy previously served in the New York National Guard as the Director of the Joint Staff where he was responsible for directing activities of the Joint Force Headquarters and advising the state’s senior leaders on military domestic operations to support civil authorities.

Murphy began his military career in 1977 when he enlisted in the Iowa Army National Guard. He attended the Iowa Military Academy, Officer Candidate School and was commissioned in 1979. General Murphy attended helicopter flight training with a follow-on assignment as an aero-scout pilot. After serving in company and battalion command positions, as well as several battalion and brigade staff positions, General Murphy attended the United States Army War College.