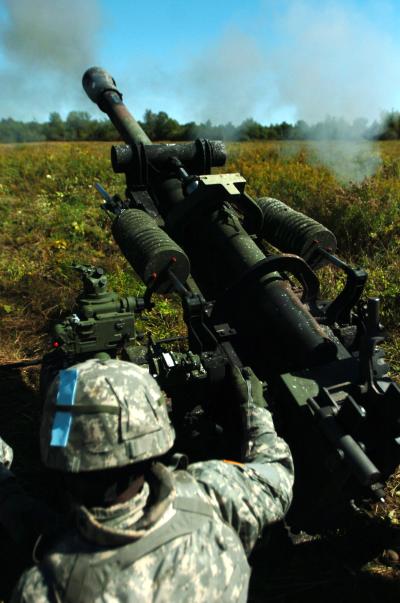 Sgt. Frantz Sylvain, the gunner for 8th section, Bravo battery, 1-258 Field Artillery fires the M119A2 howitzer Sept. 17 at the Fort Drum artillery range. The unit received new howitzers and this weekend drill was the battalion’s first live fire exercise with its new 105 millimeter guns. The new modern artillery pieces replace the M-102 howitzer’s the battalion had been borrowing to train with.

The event marked the unit’s ownership of the newly assigned howitzers after five years of borrowing tubes from other artillery units in order to train.

The battalion reorganized as a towed artillery battalion in 2005 to support an infantry brigade. Prior to that, the 1-258th was equipped with M109 self-propelled howitzers and supported an armored brigade.

More than 250 of the units Soldiers deployed to Iraq in 2004, serving in a military police capacity.

Following the unit reorganization, the battalion borrowed M102 howitzers of Vietnam War vintage when they went to the field.

“Every time we fired, we had to borrow cannons from another unit,” said Command Sgt. Major Christopher Parker, the battalion Command Sgt. Major. “The Soldiers love the new guns...These men are artillerymen and they love to shoot and it is important to them to have their own equipment and not have to rely on another unit.”

The new tubes were christened by Lt. Col. Michael Hoblin, the battalion commander, just after successfully sending the first round down range.

“The transition to the new guns went very well,” Hoblin said. “The battalion’s ability to become certified after such a long period of time without having guns is really a testament to the NCO leadership and to the firing batteries.”

The battalion traveled to Michigan and Florida earlier this year to certify gun crews on the new M119 howitzers. They were trained by instructors from Fort Sill, Oklahoma prior to receiving their own.

“Now, each gun chief has been assigned a cannon and it will always be their cannon,” Parker said. “It’s more personal.”

“The training that we received as a battalion was actually great,” said Staff Sgt. Jamie Betancur, the section chief for gun eight, Bravo battery. “As a chief, it feels great knowing that I actually can own my own M119 and don’t have to borrow from another state.”

Sgt. Frantz Sylvain, the gunner for eighth section said he could not wait for the new guns to arrive.

“I am so happy to receive the guns right now,” he said. “The M102 was Vietnam era. This is 2010...The active component has been using this gun for years, but the National Guard never had it...it was about time we received it.”

Sgt. Sylvain’s primary responsibility is to lay the gun for the proper deflection and quadrant and fire the howitzer.

“Even though we just received the new guns, we have been training on them for a while in anticipation of their arrival. I could not wait until we got them, "he said.

The 1-258th is part of the 27th Infantry Brigade Combat Team and is the only artillery unit in the New York Army National Guard and, with a possible deployment to Afghanistan, the unit will be training to prepare.

“This is very exciting to get a new gun,” said Sgt. Joseph Shields, the gun chief for gun seven, in Battery A.

“We were prepared to get them. This weapon is more accurate and makes it easier on the chief and crew. Alpha Battery is very excited to field these new weapons and we will train as hard as we can...we do not know what the future brings, but we promise that we will be ready, " he added.

“This is the first time, this battalion, in recent history has had 16 guns and 16 certified crews on these weapon systems,” Hoblin said. “Without their dedication and expertise, this would have been a very difficult enterprise.”