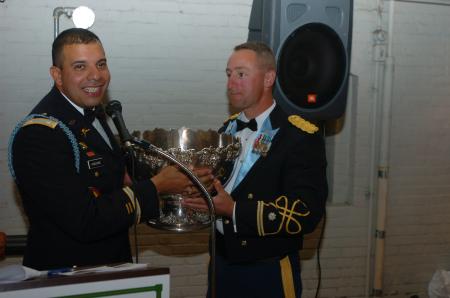 Lt Col John Andonie, the Battalion Commander of the 1-69th receives the Logan-Duffy trophy from Lt. Col. Thomas Stewart, Battalion Commander 1st Battalion 182nd Infantry Regiment. The ’Fighting 69th” won the match by two shots October 2, 2010. The trophy will be brought to the armory of the regiment where it will be displayed until the two regiments meet again. (Photo by Sgt. 1st Class Peter K. Towse, 42nd Infantry Division)

FORT DEVENS, MASS --The New York Irish beat the Boston Irish as the New York Army National Guard’s 1st Battalion 69th Infantry and the Massachusetts Army National Guard’s 1st Battalion 182nd Infantry squared off at the annual Logan-Duffy Rifle Match here Oct. 2. The Logan-Duffy rifle match, named for the commanding officers of the two regiments during the Spanish - American War-Brig. Gen Lawrence Logan of Massachusetts and Brig Gen. Edward Duffy of New York-- is an annual competition that was started in 1936. The winner of the match takes the Logan-Duffy trophy back to their home armory for display until the regiments compete again. “Both regiments are of Irish heritage and it was a special occasion when the Fighting 69th of New York met the Fighting Irish of Boston in 1861 during the Civil War,” said Lt Col John Andonie, the Battalion Commander of the 1-69th . “It was this meeting that began a regimental friendship that has endured for nearly 150 years.”

“When you look at the history of this match, how it is based on an event that happened during the Civil War where both regiments met each other on a battlefield, I welcome the opportunity to meet the 69th on a foreign battlefield and team up,” said Lt. Col. Thomas Stewart, Battalion Commander 1st Battalion 182nd Infantry Regiment. “I would love to serve alongside the 69th just the way our ancestors served together in the Civil War.”

The first match in 1936 was won by the Fighting Irish of Boston and the 69th took the trophy home to New York in 1937. When both units were mobilized just prior to World War II in 1940 the annual competition was put on hold. It was reinstated in 1958 and the two battalions have competed to hold the trophy since then.

Seventy-four years later, members of the 69th and 182nd came together again,, bringing back the tradition of the competition that brought two regiments of Irish infantrymen together in camaraderie that is only matched by their deep devotion to their traditions.

As the announcement was being made there was silence in the room and the anticipation was apparent. The results were close with the1- 69th winning by only two shots. The trophy was presented to the 1-69th by Lt. Col. Stewart until the next Logan-Duffy match.

“Winning means so much to both sides, but what trumps the winning and the losing is the fact that just because of doing this match, we have strengthened the friendship between both regiments,” Stewart said.

“We may have won the cup, but to me, this cup belongs to all of us,” Andonie said.