August 12, 2020 | 3:07 pm Information on Novel Coronavirus
Coronavirus is still active in New York. We have to be smart. Wear a mask and maintain 6 feet distance in public.
Get the Facts 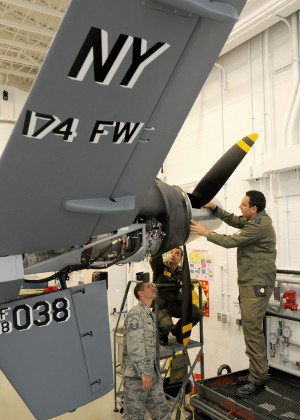 Italian Air Force Chief Warrant Officer Lorenzo Scafuto and Staff Sgt. Marco Redavide work together on a MQ-9, while receiving feedback from their instructor Master Sgt. Scott Simpson at the Field Training Detachment (FTD) in Syracuse NY, on 20 Sept 2011. Scafuto and Redavide are the first Italian Air Force members to receive formal maintenance training on the MQ-9. They are part of the 100th graduating class from the 174 FW FTD, which is the sole formal MQ-9 maintenance training facility in the U.S. Air Force. (Photo by Staff Sgt Ricky Best)

Italian Air Force Chief Warrant Officer Lorenzo Scafuto and Staff Sgt. Marco Redavide graduated from the MQ-9 crew chief course with distinction. "Despite the language barrier, Lorenzo and Marco excelled in their course work and were some of the hardest working students we have ever had," said MQ-9 instructor Master Sgt. Scott Simpson. "Many times they would stay late to better understand the course material and obtain more hands-on experience. They had a real thirst for knowledge."

Messrs. Scafuto and Redavide are the first Italian Air Force members to receive formal training on the MQ-9. Prior to working on the MQ-9, Mr. Scafuto worked for eight years on the MQ-1 Predator and 14 years on the Tornado fighter aircraft. According to Mr. Scafuto, "the MQ-9 is a more complicated aircraft compared to the MQ-1--particularly the fuel system, engine and propeller--and therefore needs more attention."

During their stay in Central New York, Messrs. Scafuto and Redavide had a chance to visit other parts of New York State. They were particularly impressed by Niagara Falls, Lake George, New York City and the gorges in Watkins Glenn. They also visited local attractions such as Onondaga Lake Park and came away impressed by cleanliness and commitment to recycling in the community.

"We appreciated very much the cooperation and hospitality of the American people," said Mr. Scafuto. The instructors at Hancock Field not only helped us understand this air frame, but they allowed us the opportunity to witness the pride that the U.S. military takes in its facilities. We were particularly impressed by the public respect shown to members of the United States military."

The 174th Fighter Wing was formed in 1947 as the first post-World War II Air National Guard flying unit in New York State. The unit currently flies the state-of-the-art MQ-9 remotely piloted aircraft from Hancock Field Air National Guard Base, Syracuse, New York in support of American ground forces in Afghanistan. Military units at Hancock Field employ 1,200 men and women, and the base has an annual economic impact of $100 million.