Honors for an American President 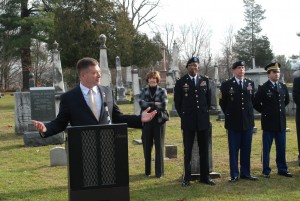 Brig. Gen. Renwick Payne, Director of the Joint Staff and Command Sgt. Maj. Frank Wicks, the senior enlisted Soldier of the New York Army National Guard joined members of the military forces honor guard and more than a dozen Soldiers from the Joint Force Headquarters facility in Latham to present honors and lay a wreath at the grave site of Van Buren to honor his birth date, Dec. 5, 1782.

The annual recognitions from the New York National Guard are part of a White House effort each year to present wreaths at the grave sites of all former presidents.

“On behalf of our governor, our Adjutant General and our president, I am so glad to be able to join this group today,” Payne said to a gathering of more than 40 local residents, elected officials, middle school children and representatives of the National Park Service from the nearby Martin Van Buren Historic Site.

Payne touched on Van Buren’s political legacy of bringing together diverse political groups into the emerging Democratic Party. As Americans, Payne said, we are many individuals who make up this diverse country. But from many diverse people, we are one nation.

Van Buren became involved in New York state politics as a young lawyer and first served in the New York State Senate from 1812 to 1820 and as New York’s Attorney General from 1815 to 1819.

He was elected to the U.S. Senate in 1821, serving until his election as Governor of New York in 1828. Van Buren began his term on January 1, 1829, returned to Washington just a few months later as U.S. Secretary of State for President Andrew Jackson in March of 1829.

Van Buren’s selection as Secretary of State recognized his key work as a northern leader for the presidential campaign of Andrew Jackson. In 1832 he was elected Vice President on Jackson’s ticket before winning the presidency for himself in 1836.

He served in the White House from 1837 to 1841 when the nation experienced a severe economic downturn, known as the “panic of 1837.” Van Buren served one term and was defeated in 1840 by William Henry Harrison, failing to carry even his home state of New York. He was twice defeated for the office in 1844 and again in 1848 before retiring from public service.

Among the dignitaries presenting honors and laying wreaths at the grave site was Congressman Chris Gibson, a Kinderhook native.

“I was here for this very ceremony some 30 years ago,” Gibson said. “Back then, I was a high school senior and a private in the New York Army National Guard and stood with the troops as part of the honor guard.”

“I am proud to be from Kinderhook, a place that produced Martin Van Buren, a great statesman,” Gibson said.