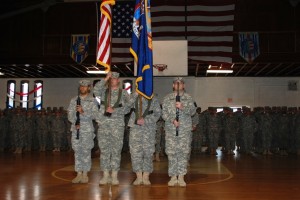 HORNELL-- Soldiers of the 222nd Military Police Company stand at attention during their farewell ceremomny at the Armory here on Friday, Feb 22.

“Listen to the walls” Hornell Mayor Shawn Hogan told members of the 222nd Military Police Company as they prepared to depart Hornell’s historic armory for federal duty on Friday, Feb. 22. The walls of the 100-year old armory-covered with plaques and pictures-tell the story of citizen Soldiers leaving the Hornell Armory to fight in the Spanish American War in 1898, World War I in 1917, and World War II in 1940, the mayor said. Now 134 Soldiers of the “Triple Deuce” are adding to this legacy as they leave the armory to serve in Qatar, he added. Hogan, was one of several speakers who honored the Soldiers during their mobilization ceremony. U.S. Representative Tom Reed, R-Corning, joined Major General Patrick Murphy, the Adjutant General; and Col. Jim Pabis, the commander of the 153rd Troop Command; in speaking to the Soldiers and their families. Murphy assured the families that their Soldiers were ready and that their nine-month mission to secure U.S. facilities in the small Persian Gulf state would be a good one. “The soldiers standing here are well-trained and professional,” he emphasized. “This is not necessarily a happy time but it does not have to be a sad time either,” Murphy said. Soldiers join the Army National Guard because they want to deploy and this is an opportunity for these part-time Soldiers to serve, he emphasized. He urged the Soldiers and families to stay connected by phone and e-mail while they were apart. The 222nd Military Police Company is headquartered at the Patriot Way Armory in Rochester and has a detachment at the small armory in Hornell. But the unit decided to conduct its farewell in Hornell because the community reached out to embrace the company, Pabis explained. The local Red Cross stepped up to host the ceremony and everybody wanted to get involved, he said. "This is an historic moment for the entire community and for you," Hornell Mayor Hogan told the troops. "You are the sons and daughters of the City of Hornell. We embrace you and we will be here when you return."

Rosa brought Margaretville Volunteer Fire Department tee-shirts to distribute to all the soldiers.

The 222nd has been filled with qualified National Guard Soldiers from around the state who want to deploy, said Sgt. 1st Class Shane Stevens.

“It’s been a great unit to be in and they know that they can trust our leadership and the leadership will guide them in the right direction and we should have a pretty good deployment," he said.

Major Karl Berg, the commander of the 222nd, said he had many Soldiers with previous deployments with Afghanistan or Iraq to help the newcomers figure out what needs to be done.

It is going to be a good deployment, Berg said.

The unit is conducting post-mobilization training at Camp Shelby, MS prior to deploying.