Exercise brings Canadian, US Forces Together for Training 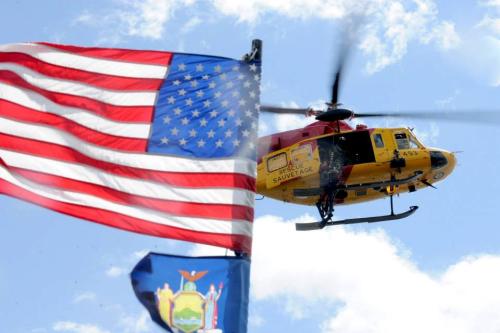 The training exercise demonstrated the ability of the MQ-9 to work in an interagency and international search and rescue environment, giving additional maritime training to the Joint Terminal Attack Controllers of the 274th Air Support Operations Squadron, based at Hancock Field with the 174th Attack Wing.

Exercise participants encountered two training scenarios to challenge their coordination: one simulating a Noncombatant Evacuation Operation abroad and the other exercising support to civil authorities in response to a terrorist incident on U.S. soil.

The evacuation scenario required the notional relocation of American citizens from a ground site (simulated by the unit’s location on Hancock Field), and moved overland to a sea port for a maritime evacuation.

Aircrews operating the 174th Attack Wing’s MQ-9 provided overwatch as roleplayers from Rally Point contractors, who support the MQ-9 training program, were transported by van to the Coast Guard Station in Oswego. The training allowed the MQ-9 to utilize the expanded special use airspace over and around Hancock Field in Syracuse to give crews a realistic environment for the training.

Air National Guard air ground controllers from the 274th ASOS then transitioned to the Coast Guard’s 47-foot Motor Lifeboat the Coast Guard’s primary search-and-rescue vessel on Lake Ontario to continue communication with the MQ-9 pilots and sensor operators and provide overwatch as the roleplayers were taken out into the waters of Lake Ontarior, simulating their maritime evacuation, prepared to act as controllers for MQ-9 actions against threats to the civilian evacuation effort. “The integration of the MQ-9 into this scenario made perfect sense,” said Master Sgt. Josh Deweese, the Chief JTAC Instructor at the 274th ASOS. “It provided the requisite guidance as to the disposition of both hostile and friendly forces, greatly accelerating our ability to respond to the situation.” New York Naval Militia crews provided the simulated seaborne threat to add realism to the training.

Airmen from the 274th are more accustomed to the terrain in Iraq or Afghanistan, providing communications and control for aircraft supporting ground troops. The maritime exercise on Lake Ontario transitioned the JTACs to an environment requiring versatility and adaptability. In addition to this maritime exercise, squadron JTACs participated in numerous training exercises in Lebanon, Niger, Lithuania, Latvia, Estonia, and Slovenia over the last two years.

They have also put their tactical communication skills to use at home in New York State to set up landing zones following the flooding in the Binghamton area following Tropical Storm Lee in 2011 and in Brooklyn following Superstorm Sandy in 2012, demonstrating their ability to provide flexible response the needs of various missions.

Demonstrating the ability of the MQ-9 to support civil authorities during times of crisis or disaster- when expressly approved by the Secretary of Defense in accordance with U.S. law -was the goal of the second scenario, which involved a simulated domestic terrorism incident in which attackers attempt to escape across Lake Ontario after a bomb is detonated at a public event.

As civilian first responders work to save lives and law enforcement moves to pursue the attackers, the Incident Commander requested aerial imagery from the U.S. military and the First Air Force tasks the 174th Attack Wing to support. Using the optics and extended flight time of the MQ-9, information for location and pursuit of the suspects was relayed to Coast Guard and law enforcement personnel. The coordinated effort and direct communication with the aircrew, in conjunction with law enforcement personnel, tracked and apprehended them from aboard the Coast Guard response boat.

“The capabilities of the MQ-9 were far greater than we had expected,” said Senior Chief Craig Ross, officer in charge of U.S. Coast Guard Station Oswego. “This has been a great opportunity to showcase the joint capabilities in a maritime environment.”

Over the course of the exercise, the 174th Attack Wing’s Mobile Emergency Operations Center captured the MQ-9 video and relayed it to the New York National Guard Joint Operations Center, adding real-time information for Incident Commanders during natural disasters. Sharing of real-time information to responders adds to their ability to coordinate their response, successfully demonstrated by this summer’s use of MQ-1 Predators in support of the wild fires in California around Yosemite National Park.

Search and Rescue forces from the 424 Squadron of the Royal Canadian Air Force added to the realism of the exercise, completing several water recovery operations of personnel, deploying a hoist-equipped CH-146 Griffon helicopter and a C-130 Hercules for the extractions. The SAR Technicians parachuted into Lake Ontario from the Hercules to quickly recover some personnel. “The addition of the Canadian forces was a unique opportunity to further blend otherwise disparate units into a single mission-cohesive force,” Cox said.

Col. Mike Shanahan, Deputy Commander of the 152nd AOG, parent unit of the 274th at Hancock Field, added that the training for a coordinated response was as important as employing the different aircraft.

“The exercise proved to be a good test of our Command and Control Communications systems, which I expect to be enhanced each and every year with lessons learned during the maritime exercise in conjunction with new and improved voice and data links with airborne, naval and ground units "improvements which will enhance the ability of the New York Air National Guard to respond to natural disasters,” Shanahan said.

“We have proven that the MQ-9 is an enormously valuable tool in support of maritime forces,” Cox said. “Training like this demonstrates the evolving and indispensable role of Air Force JTACs and remotely piloted aircraft across a broad spectrum of joint operations, from tactical operations to civil support operations.”