August 8, 2020 | 9:55 am Information on Novel Coronavirus
Coronavirus is still active in New York. We have to be smart. Wear a mask and maintain 6 feet distance in public.
Get the Facts 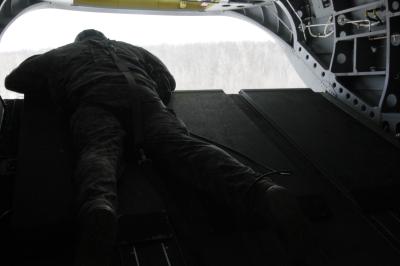 FORT DRUM --Staff Sgt. Jeff Lentz did something new in his Army National Guard aviation career during a training mission Saturday, March 5-- for the first time, the flight engineer with Company B, 3rd Battalion, 126th Aviation helped land a CH-47F Chinook helicopter on a building.

“It was pretty exciting,” Lentz said of the experience. “It’s always cool to do something new. It kind of shows the versatility of the aircraft and the mission that we can do too.”

The flight engineer said it is also about “supporting the customer--in this case, Air National Guard joint terminal air controllers, or JTACs, from the 274th Air Support Operations Squadron -- and inserting the Airmen where they wanted to go for an insertion into a mock village at Fort Drum, N.Y.

The CH-47 company, which comes under the control of the 42nd Combat Aviation Brigade, has trained regularly in air insertion techniques with the 274th JTACS.

He said the aviators found out about three days before the mission that the building was one of the places in the mock village that the Airmen-- known as JTACs for Joint Tactical Air Controller-- wanted to land for their exercise, so the aviators contacted Fort Drum range control and confirmed that the building could support the aircraft’s weight for the landing.

“The big thing is weight and size, the weight that the building can support and the size,” Lentz said, adding that after verifying the safety, the landing comes down to the crew’s comfort level and experience. “Other helicopters have actually landed on it. We weren’t the first ones to do it. … It’s straight experience and nerve. They were able to pull it off.”

The landing itself is good training for a tactical environment, Lentz said, because in that situation, the crew cannot call range control to see if a building is safe to land on. In that case, he added, the crew will attempt the landing and, should the building fall, pick the helicopter back up and abort the landing.

During Saturday’s landing, Lentz lay on top of the Chinook’s rear ramp and peered under the aircraft to physically watch its rear landing gear touch down. At the same time, the left and right door gunners looked out of their respective sides, and the two pilots kept an eye on things up front while maneuvering the aircraft.

As a flight engineer, Lentz said he had never landed on a building before but had assisted in landings in confined areas. Those situations are all about clear, concise communication among the crew members, he added.

“They were making calls, and then I was on the ramp,” Lentz said. “All five of us were basically talking in a certain way that’s super fast to communicate with and super easy to understand with air crew coordination, making sure that the helicopter as basically on the center of the building and it was safe to bring it down.”

He said most of the communication took place among himself and the door gunners since nobody but him could see the tail of the aircraft and the rear landing gear. The crew did not want to completely land on the building and put all of the aircraft’s weight on it, so it landed with only the rear gear and kept the front in the air.

A key part of the process is communicating in a certain way and making sure that the same word means the same thing every time, Lentz said.

“Any time you land on something small, it takes multiple people, lots of information input into the cockpit, for them to be able to do what they’ve got to do,” he said. “There’s experience built into it. There’s a trust factor. … A lot of this goes into air crew coordination. A good crew that can execute that crew coordination, you can work miracles with that helicopter.”

Lentz said the basics include the same word meaning the same thing, clear and concise communication, telling the pilots what to do and not what they’re doing, and having the right mindset in the situation.

“Once you can do it right and you have the faith in your other crew members and your own experience and you can rely on their experience, you can do like what we did today,”