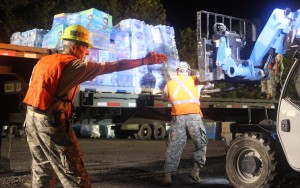 CAMP SMITH--As donations of relief supplies for Puerto Rico continue to pour in, the New York Guard state defense force has doubled the size of its force on State Active Duty.

On September 24th, under the direction of New York Governor Andrew Cuomo, the New York National Guard established donation collection points across the state. These collection points were set up to accept the influx of much needed public donations of emergency relief supplies for Puerto Rico, following the aftermath of Hurricane Maria, including items such as bottled water, flashlights, batteries, diapers, baby wipes and baby formula.

The influx of donations from the public has been remarkable, reaching far beyond New York State, with trucks coming from as far as Ohio.

Camp Smith in Cortland Manor, New York was set up as the primary consolidation point for the donations coming from all the state’s collection points.

To manage the consolidation, warehousing and transport of the supplies, and prepare them for shipment on to Puerto Rico, the 719th Transportation Company, under the 369th Sustainment Brigade, under the 53rd Troop Command Headquartered at Camp Smith, and the New York Guard State Defense Force were activated to serve alongside one another at Camp Smith.

“I’ve been on State Active Duty alongside the National Guard before,” said Specialist Steve Morelli of the 88th Area Command, New York Guard, “but this is by far the most challenging and rewarding activation yet”.

What began as an activation of 25 New York Guard members on September 29th, has nearly tripled in size in just under two weeks.

The rapid increase in personnel has been necessary to meet the full scope of the New York Guard’s mission to provide the logistical manpower needed to support the New York Army National Guard at Camp Smith, who have been working together in an Operation officially known as Task Force Donation Warehouse Ops.

Since day one, the New York Guard and Army National Guard efforts have been a 24-hour operation, working around the clock to consolidate and prepare these much-needed supplies for rapid shipment.

With its current force of 70 soldiers, led on the ground by Second Lieutenant Richard Shaw, the New York Guard has been working in three shifts to keep the supplies moving out the door for shipment to Puerto Rico, as new donations continue to arrive each day.

“We’re ahead of the curve,” said 2LT Shaw. “Our committed soldiers are preparing relief supplies faster than expected. We’ve processed over 1500 pallets, which exceeds our previous target goals."

For many of the New York Guard members, who come from all over the state, this mission hits close to home.

“This is personal for me,” said Staff Sergeant Jesus Sanchez. “90% of my family are in Puerto Rico. When I was a kid I lived there for two years.”

Before the hurricane hit the island, Sanchez’s family was already sending supplies in preparation. “We were on the phone with my grandma when it hit and the phone line went dead. It was scary because for a week we didn’t know where my family was. I couldn’t sleep.”

When the New York Guard was activated, he jumped at the chance to help.

“Whether I’m working here in New York over there, I’m helping my people. When I’m on the forklifts moving water, clothes or medical supplies, I think about them. I’m here for the long haul on this activation. I owe it to them, and that’s why I’m here and working so hard.”

The mission is expected to continue as long as the volume of donations from the public warrant the New York Guard’s logistical support, and could last through the rest of 2017.