Media Advisory for the Homecoming Celebration of 300 Combat Troops

NEW YORK -- This year’s Saint Patrick’s Day Parade in New York City will once again be led up Fifth Avenue by the historic 1st Battalion, 69th Infantry, the famed Irish combat unit known throughout the Army and the nation as the “Fighting 69th.” For 157 years the Citizen Soldiers of the Army National Guard have led the city-wide celebration past Saint Patrick’s Cathedral. This year the battalion will also honor it’s recently returned combat veterans, Soldiers who volunteered to deploy with the Army Guard’s 27th Brigade Combat Team for Operation Enduring Freedom in Afghanistan.

11 a.m. Tuesday, March 17, 2009. The battalion marches back into the unit armory for the Freedom Salute of its returning Afghanistan veterans approximately 1:30 p.m.

The 1st Battalion, 69th Infantry Regiment traces its heritage back to 1851 when the Second Irish Regiment of the New York State Militia organized. That regiment was combined with others to form the 69th Infantry Regiment, which became a part of the famous Civil War "Irish Brigade." The organization has served as the St. Patrick’s Day Parade’s Honor Guard in New York City since it was organized in 1851. Anti-immigrant emotions in that day often turned violent, and the formation of militia troops of Irish heraldry has led the city parade in every year since. Reportedly the 69th got its nickname as the "Fighting 69th" from Confederate General Robert E. Lee during the Battle of Malvern Hill in 1862 in Virginia, when it forced the "Louisiana Tigers" Brigade to retreat. Ironically, the 69th fought in the same brigade as the Louisiana Tigers during its deployment to Iraq in 2004 and 2005 when the 69th was part of the brigade, now the 256th Infantry Brigade of the Louisiana Army National Guard. In World War I the 69th was redesignated the 165th Infantry and fought as part of the 42nd Infantry Division, the Rainbow Division, only the second U.S. combat division to arrive in France with the American Expeditionary Force. The author of the poem "Trees," Sgt. Joyce Kilmer, was a scout in the 69th Infantry and died while serving in France. In World War II, the 69th mobilized with the New York National Guard's 27th Infantry Division for service in the Pacific, invading the islands of Makin and Saipan and fighting on Okinawa. The Soldiers of the “Fighting 69th” sent the regiment’s Second Color regimental green flag from the American Civil War as a gift to the people of Ireland in 1963 as a recognition of the unit’s Irish roots; the flag was presented by President John Fitzgerald Kennedy, on behalf of the Regiment and hangs in Leinster House, the parliament building in Dublin. In 2004 the battalion mobilized for service in Operation Iraqi Freedom. As part of the 256th Brigade Combat Team, the battalion secured "Route Irish", the road from Baghdad International Airport to downtown Baghdad. At one time this was termed the most dangerous road in Iraq and the 1-69th turned that around in the summer of 2005. In 2008, approximately 300 Soldiers from the battalion volunteered for service in Afghanistan with the Army National Guard’s 27th Brigade Combat Team and Combined Joint Task Force Phoenix, training and mentoring the developing Afghan national army and police. 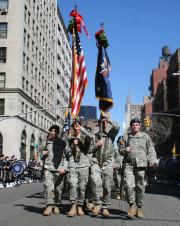