Coverage Opportunities: Video of participants firing basic small arms. Opportunities to interview Subject Matter Experts on marksmanship and speak with participants during bresaks in the action. In order to obtain access to this secure facility, members of the media should contact the Division of Military and Naval Affairs Public Affairs Office at 518-786-458 or call Staff Sgt. Kevin Abbott at 315-427-3084 on April 24 or 25. Media members will need a current press card and photo ID for access to Camp Smith.

Marksmanship training and competition has long been a key component of National Guard training. During the 1800s Annual New York National Guard shooting competitions in New York City and at Camp Smith, then known as Peekskill Camp, were reported by the New York Times and other newspapers. The state’s armories are filled with marksmanship trophies won in local, state, and national competitions and proudly displayed. Today the tradition continues with a 3-day training event that allows units and individual Soldiers the opportunity to improve their level of marksmanship training, engage in healthy competition, and pick top contenders to represent the state in national competitions. The modern TAG Match requires participants to employ the weapon used on the battlefields of Iraq and Afghanistan. Participants in the TAG Matches learn to improve their shooting skills and take those lessons back to the other soldiers in their units as trainers. Photo Cutline: Photo by Sgt. 1st Class Steven Petibone: A NewYork Army National Guard Soldier takes aim with an M-9 pistol during the 29th Annual TAG Match in 2009. 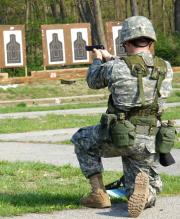