NEW YORK, NY (11/10/2009)(readMedia)-- Members of the New York Air National Guard's Long Island-based 106th Rescue Wing will display their unique ability to rescue survivors from the water during a Veterans Day exhibition at the U.S.S. Intrepid Sea, Air &Space Museum Wednesday Two HH-60s will deploy six pararescue Airmen into the Hudson River alongside a "survivor" located near the USS Intrepid. A "T-Duck" or tethered rubber raft ( getting its name from a rubber duck) will be lowered into the river for the survivor. The survivor will be retrieved by one of the HH--60s, and three pararescue jumpers will climb a rope ladder up to the helicopter. The HH--60s will then fly up the route of the Veterans Day parade along 5th Avenue before returning to land on the USS Intrepid at approximately 1245. Visitors to the museum ship will be able to speak with the crewmen.

Coverage Opportunities: Imagery of the rescue demonstration and helicopters landing on the Intrepid and musem visitors speaking with the airmen. There will be opportunities to interview members of the Aircrew and the rescue teams.

106th Rescue Wing: Based at Francis S. Gabreski Airport Air National Guard Base at Westhampton Beach, the 106th Rescue Wing operates HH-60 Pavehawk rescue helicopters and HC-130 search and rescue aircraft. The wing deploys Airmen and assets regularly to combat zones in Afghanistan in order to provide search and rescue support to American and allied service members. The wing also provides assistance to the United States Coast Guard in conducting rescue missions in the Atlantic Ocean when required. The 106th is the parent organization of the oldest element of the United States Air Force, the 102nd Rescue Squadron which was officially organized in 1915, and can date its inception back to a balloon detachment of the New York National Guard in 1908. Intrepid Sea, Air & Space Museum: The Intrepid Sea, Air & Space Museum is one of America's leading historic, cultural and educational institutions. The Museum is centered on the aircraft carrier Intrepid (CVS-11), one of the most successful ships in US history, and now a national historic landmark and one of the most unique attractions in New York City. In 1943, Intrepid was commissioned and served proudly in World War II. She went on to serve as one of the primary recovery vessels for NASA, three tours of duty off Vietnam, and submarine surveillance in the North Atlantic during the Cold War. Today the ship is a premiere educational center and a monument to all who have served our nation in uniform. Follow the New York National Guard on YouTube: YouTube at http://www.youtube.com/nynationalguard 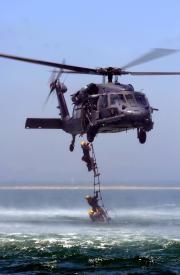