“This new hangar is a real asset in improving the training and operations of the New York Air National Guard at Fort Drum,” Governor Cuomo said. “This permanent facility provides the 174th Attack Wing with enough space to shelter its aircraft and more effectively train service members from across the country for overseas operations and domestic emergencies. As the major storms from the last few years have shown us, the National Guard is vital to New York State in responding to a natural disaster. Furthermore, this green facility will also reduce the use of energy to save taxpayer dollars in the long run, exemplifying our state’s goal to dramatically increase energy efficiency in the next several years. The completion of this project will result in a stronger Fort Drum and enhance the security of our nation.”

The newly constructed hangar incorporates green technology to reduce energy use. This includes in-floor heating, translucent panels to bring in natural light, a solar hot water heater, and solar collector panels built into the walls which allow the sun to help heat the building.

The MQ-9 is an aircraft used in a surveillance/reconnaissance mode that can also deliver laser guided missiles or 250 to 500 pound JDAM bombs on a selected target. The Aircraft flown by the 174th are used to provide a combat air patrol over American and coalition units operating in Afghanistan.

The 174th Attack Wing has been using temporary hangar space allocated from the 10th Mountain Division's 10th Combat Aviation Brigade. This space did not allow enough hangar space to shelter all aircraft needed for flying operations and conduct routine maintenance on the aircraft.

The 174th Attack Wing uses the runways at Wheeler Sack Army Airfield to launch aircraft which are used to train MQ-9 pilots and sensor operators from the Active Air Force, Air National Guard and Air Force Reserve. The pilots fly the aircraft by satellite uplink, while sensor operators are responsible for spotting targets on the ground using the MQ-9’s sophisticated visual, infrared and synthetic aperture radar systems.

At Fort Drum, the crews practice launching and landing the aircraft, along with dropping practice munitions at the air-ground range operated by the 174th Attack Wing.

The new hangar is the first step in a series of Air National Guard building projects planned for Wheeler Sack Army Airfield. The 174th Attack Wing plans to build a second hangar in the coming year to support launch and recovery operations which will allow MQ-9 operations to move completely out of the Army facilities.

Along with training MQ-9 aircrew at Fort Drum, the 174th also trains MQ-9 maintainers at its Field Training Detachment at Hancock Field.

The 174th Attack Wing's personnel also operate MQ-9 aircraft around the world from a command and control center at the base, and also deploy around the world as part of Air Force Air Expeditionary Wings.

Members of the 174th Attack Wing also respond to state emergencies and other state domestic operations missions when called upon and maintain high-tech communications and command and control equipment that can be called upon by the Governor of New York when required. 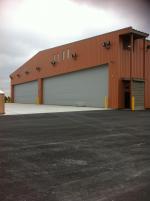