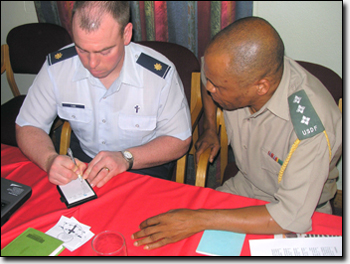 Creating a nation's chaplaincy service from almost nothing is no easy task. The details are many: What qualifications must a military chaplain possess? What duties will he or she have? Can a chaplain serve both God and the military chain of command?

When the Kingdom of Swaziland decided to create their own military chaplaincy program, they sought help from the New York National Guard. A team of Guard chaplains visited this tiny African nation for a week in February 2007 to mentor and advise the Swazis on chaplaincy service policies.

One New Yorker on this team was Chaplain (Major) Todd Luce of the 109th Airlift Wing, NYANG. A mechanical engineer as well as a chaplain, CH Luce lent some unique talents to the project.

The Swazis wanted a distinctive insignia for their new chaplain's corps, one that kept the symbols of traditional Swaziland culture but which also reflected the nation's Christian heritage. It also had to be clear to anyone that this was a chaplain's badge. Chaplain Luce listened to his hosts' comments and then asked detailed questions. What is the Swazi royal crest? What symbol represents the military in your country? How do the Swazis use religious imagery?

He then began sketching.

In ten minutes it was done - with a nod from Colonel G.G. Dlamini, Chief of Personnel for the Swazi military, the new chaplains' insignia was approved.

Chaplain Luce then arranged to take his sketch back to New York, where professional graphic artists will render the design on computer. The final product shall be turned into an insignia worn proudly by the first corps of chaplains to serve in the Swaziland Defense Force.

It's not often that a National Guard chaplain from New York has the chance to help bring to life another nation's chaplaincy service. Fortunately, Chaplain Todd Luce has both a careful ear and a talent for drawing. His contributions in Swaziland will be worn by that nation's military chaplains for many years to come. 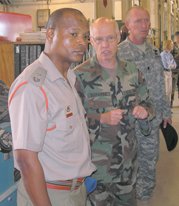 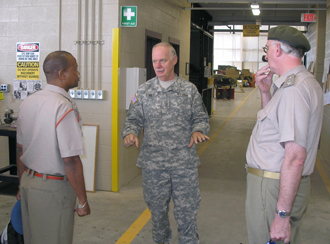 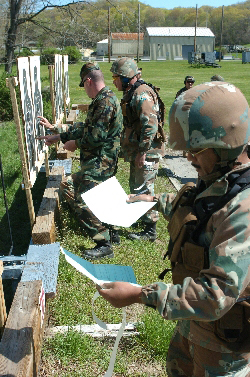 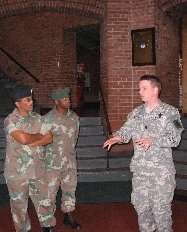 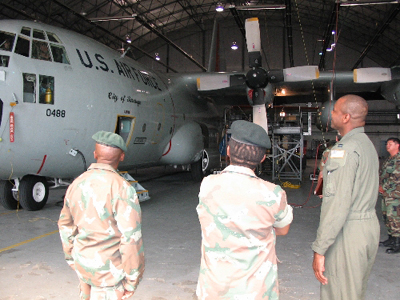 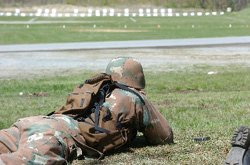 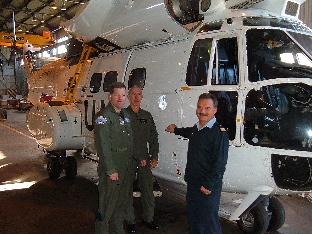 New York National Guard members, Major Brian Elsworth of the 109th Airlift Wing and CW5 Jeff Borges of the 3 Bn/142 Aviation, checked out an ORYX helicopter during their Aviation Safety Contact Team visit to the South African Air Force in May 2006. Photo by Major Omar Bradley

The group of fifteen persons visiting New York State was part of a larger seminar class of 36 individuals from the South African National Defence College arriving in Washington, D.C. in late October. The class consisted of South African military officers, staff from the National Defence College, one civilian from the South African Department of Defence, three officials from defense related industries, and five military officers from the African nations of Burundi, Kenya, Nigeria, Tanzania, and Zambia. The group of 36 persons then split up into three in order to visit U.S. states with Service Academies: Colorado (Air Force Academy), Maryland (Naval Academy at Annapolis), and New York (Military Academy at West Point).

The curriculum of the ENSP includes a one-week foreign study visit to one of South Africa’s strategic partners. While in the U.S. the program members made visits to various organizations to receive briefings about and discuss areas related to national security, multinational organizations, national government, local government, defense industry, and corporate business. They particularly sought to gain an understanding of the legal basis, structure, politics and operation of state and local governments, in the context of the American federal system.

On 3 November, the group visited a number of locations in Manhattan. One of the visits was to the New York Police Department (NYPD) Headquarters. Two traditional Guardsmen who are NYPD police officers assisted with this. Police Sergeant Justin Lenz (Operations Sergeant Major in the 104th Military Police Battalion, Kingston, NY) met with the group briefly to discuss his duties as a police supervisor. Chief Tom Sweeney (retired Lieutenant Colonel from the 53rd Troop Command, Valhalla, NY) greeted them at One Police Plaza and gave a presentation on how the NYPD selects and trains its officers. Chief Sweeney and Officer Lenz also played a key role in showing how traditional Guardsmen manage to successfully balance their military and civilian careers.

The ENSP participants also toured the New York Stock Exchange (NYSE) and concluded the day with a visit to the World Trade Center “Ground Zero” location.

On the following day, the group had a magnificent view of the Hudson River as they took the train northward to visit the U.S. Military Academy and the 105th Airlift Wing. Upon arrival to West Point, the ENSP group was met by Brig. Gen. Michael Swezey, Commanding General, New York Army National Guard and Colonel Harry McDonough, JFHQ-NY J5/7. As a graduate of the Military Academy, Brig. Gen. Swezey had the opportunity to share memories of his experiences as a West Point Cadet.

After a tour of a C5A Galaxy given by the aircraft's crew and maintenance personnel, Brigadier Generals Demand and Swezey exchanged mementos with the Executive National Security Program visitors. Brig. Gen. Mann presented the New York National Guard with a plaque on behalf of the South African National Defence College in appreciation for its efforts and hospitality during the ENSP trip. He commented that the visit to New York had accomplished its objectives in affording its participants a better understanding of South Africa's strategic partner.

The purpose of the brief stop-over in New York was to acquaint the South African NCOs with the State's National Guard Military Police capabilities, missions, and members. The visit was part of New York's State Partnership Program (SPP) relationship with the Republic of South Africa.

New York and South Africa have been partners under the SPP since August 2003. The SPP is a National Guard initiative that aligns U.S. States with countries around the world for the purpose of fostering mutual interests and establishing long term relationships across all levels of society. New York was the first state to have an SPP relationship on the African continent.

While in New York, Staff Sergeants Mothapo, Masemola, and Halliday spent some time with the 104th MP Battalion in Kingston. While there, they received an orientation briefing on the battalion's organization, mission, and training. Staff Sergeant Mothapo, the senior member of the South African group gave a reciprocal briefing about his position as a trainer at the South african Military Police School. He also discussed his experiences as a member of the United nations Peace Support Mission deployed to the Democratic republic of Congo.

The three NCOs also visited with the 105th Airlift Wing Security Forces at Stewart Air National Guard base in Newburgh, New York. MSgt David Pritchard hosted the South Africans at during their visit to the 105th Air Wing. While at Stewart, the visiting NCOs received a briefing on Air Force Security Forces, their duties at the Air Base, and a tour of the base.

New York State hopes to hold an exchange between the leadership of the South African Military Police Agency and New York's National Guard MPs. Eventually, the State and the Republic of South Africa could conduct squad and even platoon exchanges during annual training events or other Military Police training or exercises.

Forest fires. Terrorist threats. The challenges of deploying Reserve Forces to a peacekeeping operation far from home. These are just some of the issues the New York National Guard faces every day. As several of the state's senior leaders recently learned, these problems are not unique to the United States. 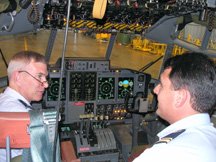 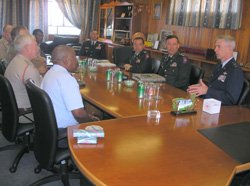 By meeting with South African leaders the New York team learned much about the expanding role of reserve forces in South Africa, and also how that nation responds to domestic emergencies such as floods or wildfires.

New York and South Africa have been partners under the State Partnership Program since August 2003. New York was the first state to have an SPP association on the African continent, and our relationship continues to grow. There are many exciting events planned for the future check back often to learn more about this program!

Shaken but not stirred. Dr. (Lt Col) Joe DeLuca, NYANG, poses after his encounter with the land mine. 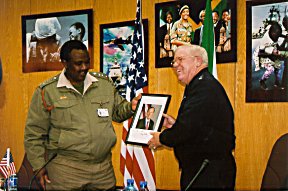 The formal announcement ceremony was held at the Ministry of Defence in Pretoria, South Africa. The National Guard Bureau program currently has 37 states and territories in 40 partnerships across the globe. The partnership between New York and South Africa is the first such relationship on the African continent.

Maguire had the opportunity to meet with United States Ambassador Cameron R. Hume, Defense and Air Attachi Colonel Clarence D. Smith, Jr., and Office of Defense Cooperation (ODC) Chief Lt. Col. Samuel K. Millett. During the ceremony, Gen. Wald spoke of the characteristics of New York State and the Republic of South Africa that make the partnership a good match. Maj. Gen. Maguire emphasized the strengths that members of the National Guard bring to the partnership. “Soldiers and airmen from the New York National Guard bring with them unique skills that they carry over to their military positions from their civilian jobs,” Maguire said.

The National Guard SPP began in 1992 in the Baltic Nations as a joint engagement effort between USEUCOM and the National Guard Bureau (NGB) with the intent to assist former Warsaw Pact nations in their transition from communist governments to democratic governments.

Partner states typically expand to eventually include civilians and civilian agency participation in partnership activities where appropriate so as to help develop relationships between partners beyond just military relationships to all levels of society.