June 11, 2021 | 1:19 pm COVID-19 Updates
The COVID-19 vaccine is here. It is safe, effective and free. Walk in to get vaccinated at sites across the state. Continue to mask up and stay distant where directed.
Get the Facts 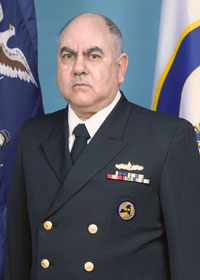 Captain Anthony Buanno graduated in 1981 with a B.S. in Chemistry from SUNY at Plattsburgh. In 2001 he received an MBA in Management from Union College, Schenectady.

While on active duty, Capt. Buanno was assigned to USS Sylvania (AFS-2) where he served as Communications Officer and Navigator. In 1984 he qualified as a Surface Warfare Officer.

Capt. Buanno affiliated with the Navy Reserve in 1986 where his assignments include:

Capt. Buanno is employed by National Grid as an Electric Design Representative in Gloversville, NY.