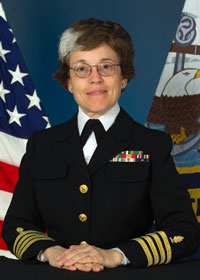 Captain Marylynn Marrese, US Navy (ret), works for the Drug Enforcement Administration, New York Field Division, New York City, assisting with tying organized crime to terrorism. The Task and Strike Forces of NY Division include membership not only from the DEA but from FBI, IRS, CBP, and HSI, (the latter two branches of Homeland Security), NYPD and NY State Police, as well as foreign law enforcement such as Australian, British and Italian representation when appropriate. Prior to that, she worked for nearly three years from 2002-2005 for the Department of Homeland Security, FEMA, in its only highly classified office, ensuring continuity of operations and of government. Captain Marrese was recalled to active duty from 2007-2012 as the Medical Corps Reserve Affairs Officer, Bureau of Medicine and Surgery, Washington, DC. This is a cross-corps role; she was board-selected despite not being a physician. Formerly, Captain Marrese had been assigned to leadership roles within Marine and Fleet Hospital units, and also served as the Executive Officer of Naval Reserve Operational Health Services Unit Naval Medical Center Portsmouth VA. She held other senior leadership roles over a 33-year career, including Commanding Officer. In 2018 she assumed the role of Commander, SOUTHCOM, New York Naval Militia, one of the country’s oldest naval militias that remains active in support of the State during times of disaster.

Currently, she serves as an adjunct professor in health care administration and management/leadership for Webster University, and until the position was abolished was an Area Mentor for faculty in the Washington, DC, metropolitan area. Captain Marrese has been published ten times, the most recent of which is in the journal of the Association of the United States Navy, for which she is currently a volunteer Director of Military and Veterans Benefits. She has had seminal articles in Military Medicine (one example: December 2002) and in EMS, an emergency services journal (2003). In her past career in public school systems as COO/CFO, she taught fellow COOs in ethics seminars and was deemed an early expert in public records management and in budgeting.