New York Army National Guard Brigadier General Michel Natali, a Halfmoon resident, will be promoted to the rank of Major General during a ceremony on Friday afternoon, August 14, at New York National Guard headquarters in Latham. 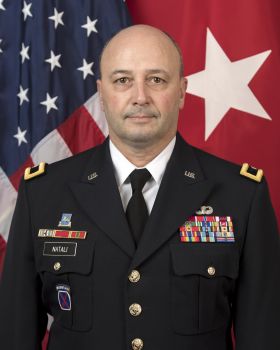 Natali, a retired New York State Police Investigator, is a veteran of the Iraq War and deployed to Somalia and Haiti while assigned to the 10th Mountain Division in the 1990s.

He will be the fourth two-star general in the New York National Guard.

Members of the press are invited to cover the promotion.

WHAT: A promotion ceremony complying with COVID-19 social distancing requirements will be held at New York National Guard headquarters.

Press can interview Natali and other leaders. Imagery opportunities include remarks and "pinning on" Natali's new rank.

For access to this secure military facility contact the Division of Military and Naval Affairs Public Affairs Office at 518-786-4581.

Natali is a Watertown native and 1983 graduate of Immaculate Heart Central High School, who served in the 10th Mountain Division before becoming a New York State Trooper after leaving the Active Army.

Natali, a veteran of the Iraq War, who also deployed to Somalia and Haiti with the 10th Mountain Division (Light Infantry), serves as the Assistant Adjutant General, Army for the New York National Guard.

He is responsible to Maj. Gen. Ray Shields, the Adjutant General of New York, for the training and organization of the 10,300-members of the New York Army National Guard.

During the response to the COVID-19 pandemic, Natali served as the Dual Status Commander- New York, responsible for commanding both National Guard and Active Duty federal forces assigned to the response in New York City.

His parents, Franco and Giuseppa Natali, still live in Watertown.

Natali has served as Assistant Adjutant General as a full-time National Guard officer since 2017. Prior to that he commanded the New York Army National Guard's 53rd Troop Command, which is based at Camp Smith Training Site in the Hudson Valley with 4,000 Soldiers located across the state.

Natali joined the Army after earning a commission through the Reserve Officers Training Corps at Norwich University in Northfield, Vermont. He became a military intelligence officer, and first served with the 5th Battalion, 8th Infantry Regiment, 8th Infantry Division in Mainz, Germany from 1989 to 1991.

In 1991, Natali was assigned to the 10th Mountain Division at Fort Drum. He deployed to Somalia and then to Haiti with the division.

Natali joined the 27th Infantry Brigade of the New York Army National Guard, headquartered in Syracuse in 1996. In 2004 he was assigned to the 42nd Infantry Division, based in Troy, and deployed to Tikrit, Iraq in 2005 as the deputy division intelligence officer.

Natali is a graduate of the Command and General Staff College as well as the United States Army War College. He has also attended the Army Strategic Education Program, the Joint Task Force Commanders Course, the Harvard University General and Flag Officer Homeland Security Executive Course and the International Executive Combating Terrorism Seminar.

Natali holds a Bachelor of Arts Degree from Norwich University, a Master's in Public Administration from Marist College and a Masters of Strategic Studies from the United States Army War College.

Natali and his wife Barbara live in Halfmoon.