New York Army National Guard aviators based at Albany International Airport turned out to welcome the first of ten new helicopters which replace older versions of the UH-60 Black Hawk currently flown there on Tuesday, August 18. 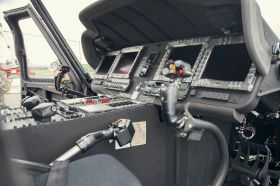 The high-tech cockpit of the new UH-60M helicopters being delivered to the New York Army National Guard. The first of 10 aircraft arrived at Albany airport on Tuesday, August 18.

A UH-60M, fresh out of the Sikorsky factory in Stratford, Connecticut, was flown to the Army Aviation Support Facility at the airport by a crew from the 3rd Battalion, 142nd Aviation Regiment from Lakehurst, New Jersey. The team had conducted flight tests there on Monday, August 17.

The UH-60M is replacing the older model UH-60L helicopters-known as "Limas" currently flown by the New York Army National Guard.

While Army National Guard units often receive equipment that was first used by the active Army, these helicopters are brand new.

The UH-60M is the latest design for the Black Hawk helicopter and incorporates upgraded T700-GE-701D engines, improved rotor blades, a fly-by-wire glass cockpit, and improved flight controls and aircraft navigation. The aircraft provides 500 pounds of more lift capability from prior versions of the aircraft.

The total cost for the 10 helicopters being based at the Albany airport and 10 more being stationed on Long Island will be $200 million.

"For us, this fielding puts us on par with the rest of the Army," said Army Maj. Gen. Ray Shields, the Adjutant General of New York. "This finally moves us from 1980s generation aircraft up to the modern era."

The arrival of the aircraft, fresh from the Sikorsky factory, improves the unit's efficiency and effectiveness, noted Chief Warrant Officer 4 Robert Hansen, the senior instructor pilot in the battalion.

"The Mike model UH-60 Black Hawks are new, fresh from the factory upgrades to our current fleet, providing aircrews with the latest in the Army's inventory of aviation," Hansen said.

"These 20 aircraft will provide significant improvements in the Army National Guard's ability to safely execute missions both here in New York and around the world," Hansen said, "with improved lift capabilities, auto-pilot, ergonomic technology and state of the art digital cockpits."

More than 2,000 UH-60 Black Hawk helicopter variants are in service with the U.S. military. The Army is fielding Mike models out through 2026, purchasing more than 950 airframes.

Each aircraft is about $21.3 million, Hansen said.

"There is an entirely new set of visual cues and available information," Scott said after his flight from Lakehurst, New Jersey to the flight facility in Latham. "So many calculations made by pilots in previous models is now presented to us in the Mike model. It makes crew work much easier and efficient."

The fielding is a welcome upgrade to the battalion pilots. Newer aviators qualify on the Mike model aircraft during flight school, Scott said.

"Our current fleet is a lot older than most of our pilots," Scott said. "A lot older."

A significant improvement in the new aircraft will be its communications capabilities, Hansen said.

"One of the biggest upgrades is going to a fully digital cockpit," he said. "It will greatly enhance our ability to safely operate the aircraft in any environment. The situational awareness gained from digital moving maps, threat overlays and aircraft systems pages will help decrease some of the workload we have while operating the aircraft."

"Flying Army aircraft, especially on real world missions, is a high-intensity activity. Downstate New York is the busiest airspace in the world," Hansen noted. "The addition of two multiband radios will allow us to monitor and transmit on more than one Air Traffic Control frequency at a time, giving us a greater situational awareness. That was one of the biggest hindrances we have with the Lima model."

More than 2,000 UH-60 Black Hawk helicopter variants are in service with the U.S. military. The Army is fielding Mike models out through 2026, purchasing more than 950 airframes.

Each aircraft is about $21.3 million, Hansen said.

For the New York, Connecticut and Maine aircrews, the fielding improves flight operations and mission support across the force, said Col. Michael Charnley, commander of the 42nd Combat Aviation Brigade.

"This is about interoperability with other forces across the Army," Charnley said. "We're quickly getting to the point where only Mike model Black Hawks will be deployed overseas."

"The Mike model aircraft has been something we have been training for and our pilots, crew chiefs and maintainers have been working on this over the last two plus years," he said.

The arrival of these first two aircraft helps prepare the battalion for the arrival of a new fleet beginning in 2021.

"Our fielding window begins in January 2021 with all 30 aircraft delivered by December 2021," Hansen said.

Aircraft arrivals occurs over many months to allow for a sustainable maintenance flow for the scheduled work required for each aircraft.

"The amount of aircraft received each month varies from two to five aircraft," Hansen said.

"Many of our newer aviators were qualified on the UH-60M during flight school and will require refresher training at our facilities," Hansen said. "Our enlisted crew chiefs and maintainers have the opportunity to attend formal Army training but can conduct the training 'in house.'"

The UH-60M aircraft are manufactured at the Sikorsky manufacturing plant in Stratford, Connecticut and complete the Army's test flights prior to acceptance and delivery at Sikorsky's post-production facility in Lakehurst, New Jersey.

The high-tech cockpit of the new UH-60M helicopters being delivered to the New York Army National Guard. The first of 10 aircraft arrived at Albany airport on Tuesday, August 18. 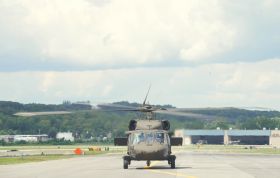