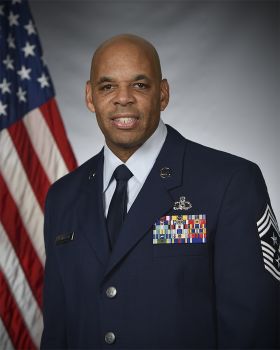 The senior enlisted advisor reports to the commander on training, discipline, advancement, and other issues regarding the enlisted force.

Video and still photographic coverage of the traditional Change of Authority Ceremony. There will be the opportunity to interview key leaders following the socially distant ceremony.

Members of the press wishing to cover the event must call the Division of Military and Naval Affairs Public Affairs Office at 518-786-4581 for access to this secure military facility.

Command Chief Master Sergeant Denny L. Richardson is the former Command Chief of the 109th Airlift Wing, Stratton Air National Guard Base in Scotia, New York. He served as the advisor to the commander and senior leaders on matters influencing the health, morale, welfare, quality of life, professional development and effective utilization of more than 900 enlisted personnel assigned to the wing.

Chief Richardson entered the Air National Guard in 1989, graduated technical school as an Aircrew Life Support Specialist and was assigned to the 135th Airlift Squadron in Baltimore, Maryland.

In March of 1997 he accepted a position as NCOIC of Aircrew Life Support for the 139th Airlift Squadron, Scotia, New York.

Richardson volunteered as a member of the 109th Mission Support Group Base Honor Guard. He graduated from the United States Air Force Honor Guard Protocol Honors and Ceremonies training course in May of 2002. Upon being selected as the Base Honor Guard Superintendent in 2008 he incorporated numerous changes. He immediately initiated a revised training record program to better track team member's experience level, established regular trainings and scheduled quarterly meetings with wing leadership. Under his supervision, the team, comprised of four full-time Airmen and a core group of 30 volunteers performed 2,200 man hours and traveled 16,500 miles annually.

He was selected as the Command Chief of the 109th Airlift Wing in October 2016.

Dooley previously served as the Senior Enlisted Leader and Group Superintendent for the 224th Air Defense Group in Rome. Dooley served in the active Air Force from 1979 to 1987 and has served in the Air National Guard since 1995.

Dooley is a native of Danielson, Connecticut. After joining the Air Force in 1979 she served as an aircraft maintenance specialists on the F-4E and then the F-15 fighter and the T-33 training aircraft before leaving the Air Force.

In December 1995, Dooley enlisted in the New York Air National Guard and joined what was then the Northeast Air Defense Sector (NEADS), part of the North American Aerospace Defense Command, and is responsible for identifying and tracking aircraft flying over the United States and Canada. The unit directs fighters to defend North American airspace.

Dooley is a Distinguished Graduate of the Air Force Senior NCO Academy and holds a degree in Space Technology from the Community College of Air Force.

Most of the force consists of traditional Air National Guardsmen who serve on a part-time basis, but others serve full-time to ensure readiness.

The New York Air National Guard also includes the Eastern Air Defense Sector, where Dooley had served, responsible for the air defense of the United States east of the Mississippi.