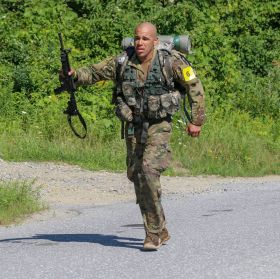 The two part-time Soldiers will compete against 12 Army National Guard Soldiers and non-commissioned officers from across the country. Seven Soldiers compete in each category.

The winners of the National Guard competition will compete against the winners of Active Army and Army Reserve competitions to see who are the most physically fit and proficient Soldiers in the Total Army of 1 million men and women.

"We in the New York National Guard are incredibly proud of Staff Sgt. Matthew Ortiz and Corporal Troy Perez for excelling at the regional Best Warrior competition and being among the best Soldiers in the Army National Guard. I know both Soldiers will do us proud," said Major General Ray Shields, the Adjutant General of New York.

This is the third year in a row that New York Army National Guard Soldiers have competed in both categories at the nationwide Best Warrior Competition.

Both Ortiz and Perez are members of the 1st Battalion, 69th Infantry, nicknamed "The Fighting 69th" and both are based at the Lexington Avenue Armory in Manhattan.

The two men are also emergency medical technicians in the New York City Fire Department and trained together at the city's Emergency Medical Service Academy.

They bested Soldiers from the New England States and New Jersey during a regional competition held at the Vermont Army National Guard's Camp Ethan Allen in Jericho Vermont during a competition held from August 13 to 16.

Their experience as EMTs, and the bond they share outside of the National Guard, helped them do better at the Best Warrior events, Perez and Ortiz both said.

"Being an EMT, especially someplace like New York City, where the call volume and the work load is very high, it forces you to deal with extreme stress," Perez said. "Other peoples' lives are in your hands so you have to be prepared to come to work and be mentally agile and fit for duty."

This year's Best Warrior competitions are being modified due to the COVID-19 pandemic. The participants wear masks when not involved in strenuous physical activity and follow social distancing rules whenever possible.

Ortiz and Perez, trained together to get ready for the New York Best Warrior Competition and then to hone their technique for the regional event at Camp Ethan Allen. They have continued to train together to prepare for the national event.

"We stayed motivated and pushed each other every day," Perez said,

They would also pick different places to run and train for the ruck march part of the competition. To keep things interesting, they said.

"We'd take the American flag and run it across the Brooklyn Bridge," said Ortiz. "It helped keep our morale up." 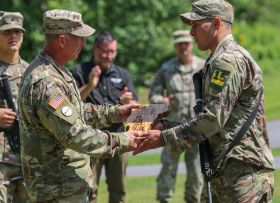