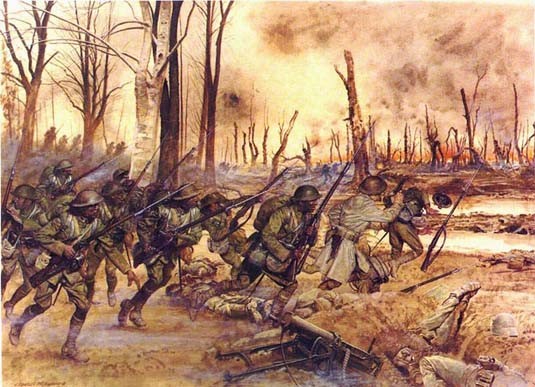 The African-American Soldiers of the 369th Infantry Regiment Harlem Hellfighters charge into the hell of the Argonne Forest in September 1917 as they advance to capture the French village of Sechault, in this painting from the U.S. Army History Series. The unit?s heroism in this battle won the men of the former New York National Guard?s 15th Infantry Regiment the unit Croix de Guerre, the highest unit award in the French Army. ?My men never retire, they go forward or they die,? said Colonel William Hayward, the regiment?s commander. The traditions of the 369th Infantry Regiment are recalled during Black History Month by the men and women of the New York Army National Guard?s 369th Sustainment Brigade.