June 3, 2020 | 2:42 pm Information on Novel Coronavirus
Coronavirus is still spreading in New York. New Yorkers are required to wear a mask and maintain 6 feet distance in public.
Get the Facts 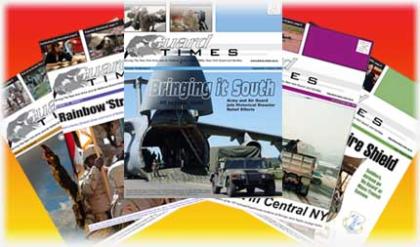 The first edition of the full-color, 34-to-38 page magazine will hit Guard members’ mailboxes in January.

Replacing the Guard Times with a magazine is part of the efforts of the Adjutant General, Major General Joseph Taluto, to bring the New York National Guard’s communications and public affairs efforts into the 21st Century. The new magazine allows the Public Affairs Office to showcase photographs and stories about the Guard in a way the newspaper format did not.

We in the Public Affairs Office are excited about out new project, now all we need is a name. We’ve been kicking around “Empire Guard”, “ New York Guardian”, and “New York National Guard Magazine” among other title suggestions. But with more than 15,000 members of the Army and Air National Guard, we figure somebody out there may have a better idea.

So we’re inviting National Guard members and family members to submit their ideas for a title for our new magazine. If you’ve got ideas, e-mail them to SFC Steven Pettibone, Guard Times editor, at steven.b.pettibone@us.army.mil. The best suggestion will become the title and we’ll do a story about you and your idea in the first edition of our new magazine.

While the magazine will come out four times annually instead of the six editions of the Guard Times that we now publish, the Division of Military and Naval Affairs website offers a way to keep up with the latest news about the New York Army and Air National Guard, as well as the New York Guard and the New York Naval Militia.

Our webmaster Bill Albrecht updates the web two or three times a week with new photos and stories about the National Guard. You’ll be able to get the latest news from the web and a slick magazine that you can keep for future reference will be mailed to your home or record. We’ll also be using the internet as a venue for releasing video command information messages from the Adjutant General.

The Division of Military and Naval Affairs public affairs staff works hard to keep up with everything that’s going on in the field, but we can’t be everyplace. We welcome your story and photograph submission for both the web page and our publications. Our goal is to keep every member of New York’s Military Forces informed.

Other new command information and public affairs efforts include the implementation of a Hometown News program. We will soon be sending out press releases about Army National Guard promotions and awards on a monthly basis to newspapers across the state. When Soldiers get promoted or are recognized, your friends and neighbors will be able to read about it in the local paper.

There’s a great story to be told about the service of our Soldiers and Airmen, both here in New York, and in combat zones on the other side of the world. We want to ensure it’s told well.