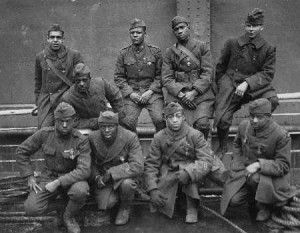 The men and women of the New York Army National Guard’s 369th Sustainment Brigade lay claim to one of the most famous stories of World War I; the tale of the Harlem Hellfighters who proved that African-Americans were first rate soldiers.

“My men never retire, they go forward or they die,” said Colonel William Hayward, the white commander of the black Soldiers of what was then the 369th Infantry Regiment. By the end of World War 1 on Nov. 11, 1918 the men of the regiment proved Hayward.

The 369th spent 191 days in combat-- longer than any other American unit-earned a unit Croix de Guerre from the French Government, saw 171 members cited for heroism, sustained 1,500 men killed and wounded, never retreated, and was the first Allied unit to reach the Rhine River six days after the Armistice and German withdrewal east.

The 369th Infantry began as the 15th Infantry Regiment, National Guard New York in 1913, an all-black unit in what was otherwise an all-white state militia. When the United States went to war in 1917, so did the black New Yorkers of the 15th Regiment. They were mustered into federal service in August of 1917, but the prejudice of the time meant that most white Americans didn’t see them as an equal part of the Army.

When the 42nd Division, dubbed the Rainbow Division, was formed and ready to parade in a New York City farewell before heading for France, the 15th Regiment was denied permission to march with them.

“Black is not a color of the Rainbow,” Col. Hayward was told.

The United States Army, despite a long tradition of all-black regiments in the Civil War and in the Indian wars--the Buffalo Soldiers of the 9th and 10th Cavalry and the 24th and 25th Infantry Regiments-- didn’t want these men or any of the other 380,000 African-Americans who served in World War I, in battle. White senior officers didn’t think black soldiers could, or would, fight. When they arrived in France in December 1917 the men of the 15th Infantry were put to work as stevedores, unloading ships.

The French Army, filled with troops from Morocco, Algeria and other African colonies, had no qualms about black soldiers fighting ability. The 15th Infantry was renumbered the 369th, making it a unit of the Army of the United States, and sent to fight with the French 16th Division and then the French 161st Division. They kept their American uniforms, but were armed with French Lebel rifles and wore French leather gear and the French “Adrian” helmet, and not the American tin hat.

Fighting with the French the 369th Infantry earned the name Hellfighters from the Germans, because of their ferocity in battle. They added the name Harlem to the German title and adopted the coiled rattlesnake emblem that the 369th Sustainment Brigade wears today.

They fought at Chateau-Thierry and Belleau Wood-names that are famous in American military history-as part of the French Army.

In May of 1918 Corporal Henry Johnson, a railroad porter from Albany, New York, became the first American to win the French Croix de Guerre, when he fought off a German attack on his listening post. During this hand-to-hand combat Johnson saved another soldier from capture. Later his son, Herman Johnson, was one of the Tuskegee Airmen, the first black pilots to fight in World War II.

369th Parade on 5th Avenue, New York, NY, after their return from France in 1919. Near the end of the war the 369th fought in the Meuse-Argonne, advancing so fast at one point that they were 14 kilometers ahead of the French units on their right and left, leaving themselves in danger of being cut off.

When the 369th returned from France to New York City in 1919, the unit that had been forbidden to march was allowed to parade up Fifth Avenue to the music of 1st Lt. Europe’s band.

Today the exploits of the Harlem Hellfighters of World War I are kept alive by the 369th Veterans Association, the 369th Historical Association, and mostly by the Soldiers of the 369th Sustainment Brigade, still headquartered in Harlem.