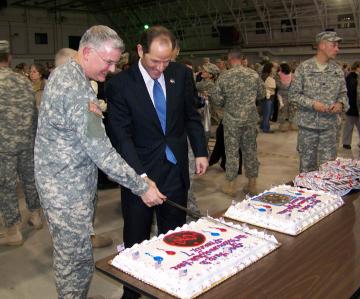 Governor Eliot Spitzer joins 27th Brigade Combat Team Commander Col. Brian Balfe in a ceremonial cake cutting at a ceremony marking the mobilization and deployment of the 27th BCT held Jan. 16 in Syracuse. The Syracuse event was one of nine held across the state as Soldiers of the 27th BCT prepared to deploy for a mission in Afghanistan. Photo by Staff Sgt. Kevin Abbott, Joint Forces HQ NY

More than 1,400 New York Army National Guard Soldiers bound for Afghanistan formally bid farewell to their friends and family, Jan 16, at deployment ceremonies held across the state from Long Island to Buffalo.

“He said the said ‘the true credit goes to those who are in the arena’” Spitzer told the 230 Soldiers and their families. “You are in the arena”, he added. “That quotation is used by athletes, politicians, lawyers; it is truly deserved only for you. You are going to the only arena that matters,” Spitzer said. “You are going into the arena where you will defend the princples that lead to our freedom.”

While the Soldiers are deployed the state will watch out for their families, the governor promised. He also promised to do all he could to get a law enacted that would grant State University of New York tuition to any veteran of Iraq and Afghanistan.

Major General Joseph Taluto, the Adjutant General and commander of the New York Army National Guard, urged the soldiers to do their jobs and watch out for each other.

“Focus on your mission. Don’t ever compromise your standards. Watch out for, and help each other, each and every day, and that includes today,” Taluto said. “I am supremely confident if you do these things, success will be yours.”

Although the Governor and Adjutant General attended the Syracuse ceremony at Hancock Field Air National Guard Base, nine ceremonies were held across the state ranging from 35 Soldiers saying goodbye at the Connecticut Avenue Armory in Buffalo to 130 Soldiers of the 1st Battalion 69th Infantry bidding farewell at Suffolk County Community College Sports Center on Long Island.

Because the deploying members of the brigade come from all over New York, the decision was made to have ceremonies in the places the soldiers are coming from, said 27 BCT Public Affairs Officer Lt. Col. Paul Fanning.

Col. Brian Balfe, the 27th BCT commander evoked the history of the brigade and urged his soldiers to follow in the footsteps of the 27th Division of World War I and II. He also praised the division soldiers for never faltering during the ten month train-up that brought them to the deployment.

“Everything we have done in the 27th, and will hence forward do, will be done as a team,” Balfe said.

Staff Sgt. James Hudson, a computer repair specialist in the brigade headquarters said he was ready to go, do the job and come home. He wasn’t looking forward to leaving his family, but he was ready to do an important job, Hudson said.

Staff Sergeant Mathew Storm, a member of the brigade S-3 section, who received a coin from Gov. Spitzer, said it was exciting to meet the governor face-to-face and good of him to come see the brigade’s Soldiers off. “I think it really showed that he cares about the Guard,” Storm said. “I think it was a very good move on his part of show support for the troops. I am grateful that he made it and I know it meant a lot to my family,” he added.

The 27th BCT will head to Fort Bragg, North Carolina on Jan. 20, prior to deploying for duties in Afghanistan. The Soldiers will be responsible for training the Afghan National Army in conjunction with other members of the coalition of nations fighting the Taliban and assisting the Afghan government.

Almost 300 Soldiers assigned to the brigade have already been mobilized and are currently deployed in Afghanistan.

A total of 1,700 New York National Guard troops are being deployed for Combined Joint Task Force Phoenix VII in Operation Enduring Freedom in Afghanistan. The total active duty deployment time is expected to be one year for the entire task force and will include about two months of training at bases in the U.S. and 10 months duty in theater.

The 27th will take command of Combined Joint Task Force Phoenix VII, which has the responsibility for the training and mentoring of the Afghan National Army and National Police and providing additional reconstruction support to the fledgling democracy and the Afghan people.

Presently, the South Carolina Army National Guard’s 218th Brigade is performing this mission having taken over from the Washington Guard’s 41st Brigade in May. The task force from New York will include Soldiers from the New York City and Hudson Valley areas, the Capital District, the North Country and Central and Western New York.

Along with the 27th BCT, Combined Joint Task Force Phoenix VII will include a Training Assistance Group formed from the Guard’s 106th Regional Training Institute based at Camp Smith in the Hudson Valley and mentoring teams drawn from Guard combat and combat support units, security force personnel from the Western New York-based 2nd Squadron 101st Cavalry, the 2nd Battalion 108th Infantry from Central and upstate New York and the Fighting 69th Infantry Battalion from New York City and the Hudson Valley, and logistic and personnel from the 427th Forward Support Battalion at various armories statewide.

More than 6,000 members of the New York Army National Guard have been called to federal active duty for service mostly in Iraq or Afghanistan since 2003. Deployment levels peaked in 2004, when more than 3,500 troops assigned to nearly a dozen different units were on duty. About 600 New York National Guard Soldiers are presently serving on active duty.