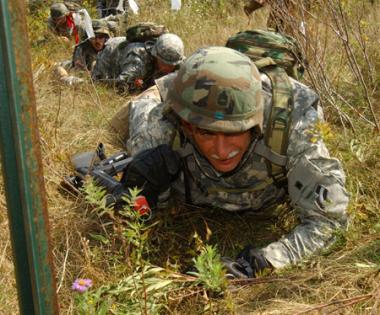 Fort Drum -- Fast-paced training scenarios, overseen by combat veterans, took the Soldiers of the 3rdBattalion, 142nd Aviation back to the basics during their AnnualTraining in September.

The aviation Soldiers focused on basic combat skills, and not flight operations, as they prepared fora possible deployment in support of Operation Iraqi Freedom.

“It’s a rare occasion when an assault helicopter battalion attends an annual training without bringing any of its helicopters,” said Lt. Col. Albert Ricci, the battalion commander. “It was back to the basics and they performed superbly!”

The change in the unit’straining tempo is embodied in a National Guard Bureau approved training planthat focuses on utilizing National Guard annual training time to get deployingunits validated on basic Warrior Tasks and battle drills.

“The necessity to completeWarrior Tasks, Battle Drills, and theater immersion training in 2007 will allowthe unit to focus on aviation operations and weapons qualification during the2008 Annual Training,” continued Ricci.

The uniqueness of the new contingencyplan is that it allows other National Guardsmen who have already returned froma deployment to help train and validate National Guard units preparing todeploy to Afghanistan and Iraq, for manySoldiers, it is their first OIF or OEF deployment.

This concept prompted New York’s 42nd InfantryDivision Headquarters to form a battalion-level temporary organization known asthe Training and Evaluation Battalion (TEBn). The TEBn is staffed by previouslydeployed Soldiers from across the division.

“The organization formedprimarily for the annual training periods in June and October for the 27thBrigade Combat Team’s (BCT) deployment to Afghanistan to begin theirtour-of-duty supporting Task Force Phoenix.” Said Lt. Col. Richard Goldenberg,42nd ID Public Affairs Officer. “Eventually, leaders and staff members from the27th BCT partnered with the division in order to conduct better and moreeffective training for Task Force Phoenix Soldiers who have so much to do andnever enough time to do it.”