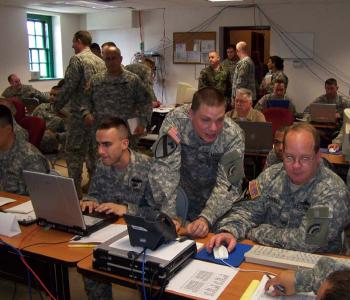 STATEN ISLAND - With power off, New York City bridges closed, and reports of looting in the wake of Hurricane Yevette, Soldiers of the 42nd Infantry Division prepared to receive reinforcements from upstate National Guard units and began deploying forces throughout the metropolitan area.

That was the exercise scenario the members of the 42nd’s Tac 2 dealt with July 13-17 during their first aid to civil authorities command post exercise. In a state emergency Tac 2 forms the core of Joint Task Force 1, responsible for command and control of New York military forces in New York City.

The exercise was a good one, said Staff Sergeant Robert Lant, the JTF Aviation Operations NCO. It was a good chance for him to practice his job.

“I think it is real important to stay focused on the homeland security mission and natural disasters because they are really important to the people here at home,” Lant said.

The exercise scenario required the 75 exercise participants to perform the planning and operations decisions they would if New York National Guard forces are called to aid New York City agencies during a major storm. The Soldiers exercised their command, control and communications tasks using a scenario built around the impact of the fictitious Hurricane Yevette coming ashore on in Queens and Brooklyn at speeds of 125 miles per hour.

When Hurricane Katrina hit the Gulf Coast in August of 2005 it generated wind speeds of 140 miles per hour.

The exercise scenario called for the participants to make decisions on moving, personnel, trucks, equipment, helicopters and supplies into and out of the disaster area. The soldiers worked with the maps, computers, high-frequency radio, and satellite communications systems they would use in an actual emergency.

The participants learned to deal with requests for generator support at hospitals and pumping stations, the need to protect electrical substations from looters, and HAZMAT events that resulted from the storm. Computer simulations which allowed soldiers to execute missions in a virtual environment where also tied into the exercise.

While most members of the unit have conducted TOC operations in theater and for Warfighter exercises, putting civilian agencies into the mix calls for different skills in battle tracking, said G-3 Ops NCO Staff Sgt. Charles Carroll. “It’s a few more pieces to the puzzle,” Carroll said.

“The threat of a severe hurricane hitting the New York City area is very real and we decided it was important to exercise our ability to oversee National Guard recovery and relief operations,” said Lt. Col. Kenneth Knoll, the “Tac 2” Officer-In-Charge, and exercise director.

“This is good stuff because you are going to be working all these issues,” Brig. Gen. Paul Genereux, the division commander, told the Tac 2 Soldiers.

The 42nd Infantry Division headquarters was deployed in Tikrit, Iraq during 2005 where it was responsible for a force of 23,000 Soldiers in four Iraqi provinces. Task Force Liberty, which the division headed, included two active Army Brigade Combat Teams, two National Guard Brigade Combat Teams, and the division’s own Aviation Brigade. Most of the Soldiers involved in the 13-17 July exercise served in Iraq and exercised the same skills there

The 42nd’s Buffalo-based Tac 1 also sent soldiers to participate in the exercise and hone their skills. The division also deployed its mobile command post tent to test its ability to deploy a forward command element. Segovia, the company that once provided MWR communications for soldiers deployed in Iraq, provided a satellite communications hookup in a demonstration of what could be provided to the division, said LTC Greg Dreisbach, the division’s G-6.

The New York Naval Militia also participated in the exercise. The Naval Militia, comprised of Navy and Marine Reservists who volunteer to serve in a state capacity as well, operates the Military Emergency Boat Service. During hurricane recovery operations the MEBS six boats would be able to reach areas on the city’s waterfront that would otherwise be isolated.

LCDR Nick Valhos was stationed in JTF headquarters during the CPX. Participating gave him the chance to familiarize the JTF staff with the Naval Militia’s capabilities, learn what some of the missions the boats might be tasked with, and work interoperability issues, Valhos said.