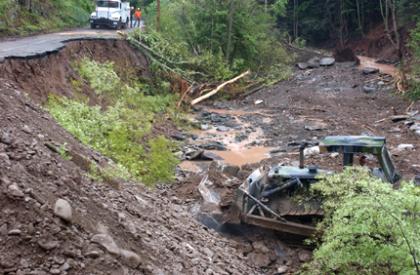 SPC Patrick E. McCarthy, 827th Engineer Company, New York Army National Guard, operates a D7 bulldozer in an attempt to restore the washed away protions of the Holiday Brook Road and return the Holiday Brook back to its original course. After heavy rains Tuesday evening, a flash flood portions of the road and damaged several home and destroyed one. Four persons were reported missing after the flood waters receded. Photo by: SFC David P. Benamati, 138th Public Affairs Detachment

COLCHESTER -- New York Governor Eliot Spitzer mobilized Army Guard engineers from the 204th Engineer Battalion based in Binghamton and the 827th Engineer Company from Walton to state active duty following devastating flash flooding in the western Catskills on June 18. The Army Guard Soldiers assisted local authorities after an unusually heavy rain overflowed the banks of the Holiday Brook in the town here, destroying several homes and causing the deaths of an estimated four residents. Several parts of Holiday Brook Road in the region between Delaware and Sullivan Counties were completely washed out by the flash flooding.

More than 60 National Guardsmen rallied at the Walton armory approximately eleven miles from Colchester and transported bulldozers, front-end loaders and other heavy engineer equipment to the scene in order to rebuild the washed away road sections for emergency responders and attempted to return the waters of the Holiday Brook back to their original course.

Emergency management officials estimated that more than eight inches of rain caused the slopes of the hills surrounding the Holiday Brook to erode and slide down into the brook, carrying hundreds of trees with the landslide. As the trees floated downstream, they clogged the several small bridges that spanned the brook, forcing the water to over flow the banks. The resulting flash flood washed away several sections of road and large sections of land.

One home was destroyed and several homes were damaged as the debris washed downstream. Four people were declared missing in the aftermath of the storm and two bodies were recovered by emergency responders during the initial National Guard callup.

Guard Engineers worked alongside members of the New York State Department of Transportation, the New York State Department of Environmental Conservation, the Village of Colchester, and the Town of Hancock to haul fill material from local sources. Placing the fill in washed away portions of the main road helped create a bypass and eventually allowed for the restoration of culverts over the brook and the repair of the road. Thousands of yards of dirt and gravel were needed to replace what was eventually washed down stream into the Pepacton Reservoir.

“It’s going to take weeks, easy, just to get a basic trail up there (the mountain area affected) to fill back in.” said Staff Sgt. Thaddeus R. Bull, Detachment 1, 827th Engineer Company.

Other members of the 827th Engineers went from house to house to check on residents in the area of Holiday Brook Road and offered assistance where it was needed. Some residents were evacuated because their homes were in imminent danger of being washed away by the flooding.

As power and emergency services were restored to the area and emergency road repairs transitioned towards more predictable recovery operations, Bull commented on how the surrounding communities of Colchester and Hancock ‘had come together’ in support of the New York Army National Guard and its partnership in support of the large number of local and state agencies.