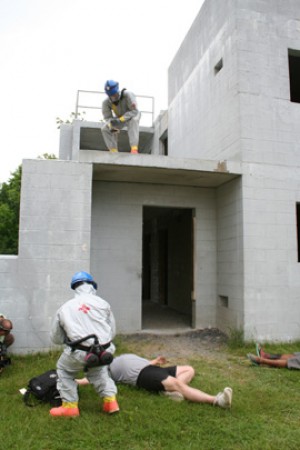 The team is trained and equipped to respond in the event of a natural disaster, chemical spill or deliberate act of terrorism involving weapons of mass destruction. The CERFP supports local civilian authorities by searching an incident site, including damaged buildings; rescuing victims, decontaminating them, and performing medical triage and initial treatment to stabilize them for transport to appropriate medical facilities.

“This is totally different from what we would normally be doing as combat line engineers,” said Staff Sgt. Jeffrey Martinez, an engineer with Company A, 427th Brigade Special Troops Battalion. His traditional mission includes building bridges or blowing things up. “I hope something like this doesn’t happen because of the number of potential casualties, but it’s a great feeling to know that our team is ready if called.”

Once an incident occurs, the type and level of contamination present is established and local authorities determine the need, CERFP team members report on site to the civilian incident commander.

In a frenzy of activity, the team immediately dons chemical suits, sets up a central decontamination sight and a medical triage area. Once the decon area is ready, the search and extraction element begins examining and assessing impacted structures for damage to enable fellow team members to focus on initial medical triage and evacuation of victims.

As victims are removed from the incident scene, they are processed through a make shift “car-wash” set up between the contaminated area, or “hot zone” and the clean area, or “cold zone.” Everyone removed is decontaminated insuring that no contamination is spread outside the existing scene. Injured patients, both ambulatory and non-ambulatory are processed under the supervision of medical personnel to insure that they are adequately decontaminated without sustaining further injury.

In addition to working with the decontamination and casualty extraction teams providing emergency medical triage, treatment, and stabilization, the Air National Guard medical team is trained and prepared to provide complex emergency medical treatment prior to evacuation. These on-scene medical personnel are also responsible for minimizing health risks and emergency treatment of hazardous materials exposure for National Guard personnel responding to the incident.

According to Scott Edkin, the New York State Office of Fire Prevention liaison with the CERFP, “This is the first time the entire team of infantry, engineer and medical personnel has had to interact. The team has made great strides over the past week.”

In addition to liaison duties, Edkin provided all Hazardous Material technical aspects of the training.

The NY Army National Guard’s 2nd Battalion, 108th Infantry provides the command structure for the CERFP. The 2-108th directs the overall activities of the CERFP and coordinates with the Incident Commander. Soldiers and Engineers from the 27th Brigade Combat Team make up the search & extraction and decontamination elements of the team. The medical element is supported by the NY Air National Guard and the NY Guard, all-volunteer force supplements where needed. The units that make up the CERFP will continue to support their traditional state and federal missions while on call as this response force.

Currently, 12 states have CERFP capability with at least one located in each of the 10 Federal Emergency Management Agency regions.

The teams evaluators included representatives from the National Guard Bureau, the First U.S. Army and other operational CERFP elements.

"I’m here in two roles," said Capt. Jeffrey Winn, from the Massachusetts National Guard CERFP team. "I’m here as an evaluator for the validation as well as an observer from my own team back in Massachusetts. I’m already taking some notes on key things I’ve learned here to take back to my unit."