Partners for Afghanistan’s future -- one community at a time 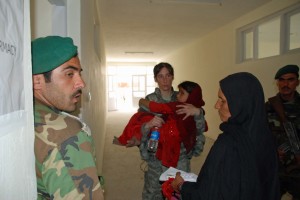 The project is the latest in a growing partnership between the Afghan community and its closest neighbor - Camp Phoenix in Kabul, home to the New York National Guard’s 27th Brigade Combat Team Headquarters and Combined Joint Task Force Phoenix, its coalition allies and area’s Afghan national security forces.

The assistance mission was held at the girls’ school, a construction project recently completed in the spring. That work is part of the Camp Phoenix ongoing outreach effort and support to the Afghan government and its people.

"We actually requested that Camp Phoenix provide us medicines," said Haji Farid, the village elder and district representative through an interpreter. "That is why the people are happy that U.S. forces are doing this," he said.

"They have asked for our assistance and we have been able to provide it," said Cpt. John Shannon from Elmira, N.Y., project coordinator with Task Force Phoenix. "And, the reason we are able to provide it is because we have this great cooperation with the Afghan Army, the police, our British allies and of course our troops are out here doing a fantastic job as well."

On the morning of August 7 a team of security force, medical and support staff left Camp Phoenix in an armored convoy and moved the short distance east to the village. The team was joined there by units of the Afghan National Army, Kabul Military District and Afghan National Police.

"We have worked with the U.S. before at the Ali Khail School, when I first got here in May," said Cpt. Lizzie Winchester, education and training service officer assigned to the 2nd Scots. Her Kabul patrol company conducted mounted surveillance around the site, while Task Force Phoenix security force personnel established an outer cordon. The inner cordon around and inside the school was run by Afghan personnel.

Captain Winchester said her troops discovered a suspicious device along the road, which meant that plans were working. In addition, women soldiers from her command searched females coming to the event, while Afghan soldiers searched the men to ensure that no weapons or explosive devices would threaten the event.

"This one’s working really well," she said, adding that she and her team were "enjoying working together once again - supporting each other and the Afghan National Security Forces to make things a bit safer."

"Our security measures are paying off for us today," said Shannon, who was quick to point out that Afghan units had leading roles. "We are just the outer piece and they are doing the real hard work of making sure that anyone who gets into the clinic to be seen, incidentally by Afghan doctors, are secure," he said.

"We go to the shuras (meetings) to talk to the elders about the health problems of the men, women and children of the community," said Lt. Col. Martin Scott, a nurse from Long Island, N.Y. from the Camp Phoenix clinic. His team meets later to plan and identify the right combination of medicine and supplies that will be needed. At the event, they mentor and support the Afghan medical staff. "We allow them to take care of their people. We provide the medications and advice on prescribing and then dispersing them," he said.

"The primary thing we need built in our area is a clinic," said Mr. Farid, expressing gratitude that both a boys’ and girls’ schools have been built. His community has more than 4,500 homes with an estimated population of 25 to 30,000 people. "And now we are happy that the U.S. forces will build a clinic in the village for us, and they are already starting to work on it," he added.

"They are doing good things," he said. "Camp Phoenix is our neighbor. When we are meeting and discussing different issues - security and clinic, schools, bridges, ditches... they are the only organization helping us," he explained. "And, when we need to talk about the issues, if we give them a call they invite us, sometimes we invite them because we think they are from our own village. They are part of our own people."