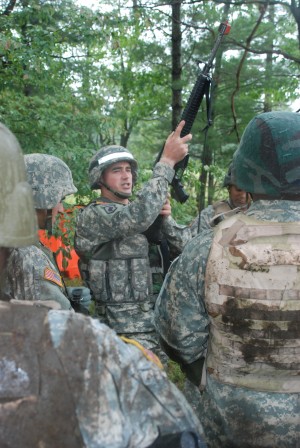 FORT DRUM -- When Maj. Donald McArdle deployed to Iraq with the 42nd Infantry Division in October 2004, he was afraid that he wasn’t really ready for war.

The training he’d gone through at Fort Drum left something to be desired, McArdle recalled.

“It was some three-week long affair that you could tell had very little planning and enthusiasm to back it up,” said McArdle, a 28-year Army veteran. He returned unscathed 13 months later, but the stress and uncertainty resulting from a lack of preparation before going downrange was something that could have been easily prevented, he said.

Today McArdle is working to prevent his experience from happening again, and to increase Soldier confidence and morale, as Officer-In-Charge of the New York Pre-Mobilization Training Assistance Element, or PTAE.

To ensure that pre-mobilization training was up to standard, Guard Bureau authorized states to create PTAEs. Guard Bureau pays for three PTAE command and control positions-a command sergeant major, a lieutenant colonel, and a major-and funds trainers at a ratio of one to each 60 deploying soldiers during a mobilization cycle.

“New York PTAE was established last April, and we were one of the first states to get started,” said Sgt. Maj. Thomas Rentz, the PTAE’s Non-Commissioned Officer-In-Charge.

Currently all 54 states and territories have at least one individual dedicated to a PTAE mission. States can increase the size of their PTAEs if they wish and can find funding.

Certifying with the PTAE results in an end state of effective training and a feeling of readiness, McArdle said. McArdle has served as a TAC officer with the 106th Regional Training Institute and was OIC of “Iraqi Army Island”, the 42nd Infantry Division’s Iraqi recruit training facility during the division’s 2005 deployment.

The PTAE is staffed with dedicated instructors, also known as Observer Controllers/Trainers, who must meet rigorous standards and myriad qualifications to train deploying Soldiers. The current PTAE consists of 10 officers and 32 enlisted OC/Ts.

“Each and every one of our OC/Ts is a combat veteran,” said Rentz. “We’ve all attended the First Army Academy and have been through the Total Army Instruction Training Course, as well as many others, in order to be qualified as instructors. Our people are subject matter experts for the training in New York State.”

“We certify, we validate, and we make sure it’s done correctly,” said Cpl. Nicholas Sbano, a PTAE OC/T.

“We also work as mentors if the Soldiers have questions. We’re right there to help them out and work through any problems they may have,” said Sbano, a member of 1st Battalion, 69th Infantry Division.

The reaction from Soldiers who have completed the training is positive.

“I’ve really enjoyed the training,” said Spc. Leslie Thomas, a Soldier from the 14th Finance unit based in Whitestone. “I really feel like it’s making a difference.”

“We’ve had nothing but encouraging results and comments from the Soldiers we’ve trained,” said McArdle.

“The PTAE reduces the time spent at a post-mobilization site, so that Soldiers are in country, boots on the ground, for a longer period of time,” said McArdle.

Deploying Soldiers receive thorough training from the PTAE in land navigation, combatives, urban operations, moving in and around obstacles, and reacting to IEDs and ambushes. PTAE "validaters" are on standby to ensure Soldiers complete necessary training and are competent in their tasks.

The PTAE’s dedication to turning out confident, capable Soldiers is vital to the success and well-being of those who will deploy in the future.

“It’s the most important job I’ve ever had in the military, period,” said Staff Sgt. David Fields, a PTAE OC/T. “I feel I’m directly responsible for a Soldier coming home alive.”