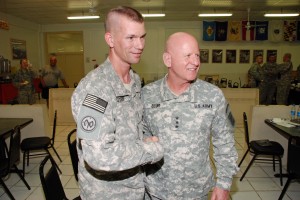 Blum, the Chief of the National Guard Bureau, was accompanied by National Guard Bureau Command Sergeant Major David Ray Hudson in his visit to members of the 27th Infantry Brigade Combat Team and Soldiers from other Guard states serving in Combined Joint Task Force Phoenix VII.

"The main thing I want to do is thank you," said General Blum while addressing troops at the Camp Phoenix.

"You are making a significant difference over here," he said in reference to CJTF-Phoenix’s mission to train and mentor the Afghan National Security Forces. "You are probably America’s best good will ambassadors," said the general, and added that citizen soldiers reflect more about what is right about America than anything else.

"It is a great honor for Combined Joint Task Force Phoenix to host the Chief of the National Guard Bureau while we are here in the combat zone," said Colonel Brian K. Balfe, commander of Combined Joint Task Force Phoenix and the 27thIBCT. "National Guard troops from nearly every state are a part of this great team and his visit is deeply appreciated," he said.

The visit by the National Guard’s top leader included stops at Camp Blackhorse, Camp Alamo and Camp Phoenix, where task force Soldiers were given the opportunity to listen to General Blum and ask him questions during open forums.

Blum has led the Guard Bureau for the last five years. During this time the Guard’s mission has changed from that of strategic reserve to a position as an operational force.

"There is tremendous respect and admiration for the National Guard, probably higher now than at any other time in history," said General Blum. "The fact that you are all volunteers is amazing. The sacrifices you make, the commitment you make - you take it for granted, I don’t," he told the Soldiers.

"You leave your family, you leave your loved ones, you leave your job, you leave your education and do not know for sure exactly where it is going to come back to you," he said in praise. "It takes a special breed of men and women that I am proud to be a part of that calls themselves National Guard."

The mission of Combined Joint Task Force Phoenix is to mentor and train the Afghan National Army and Police, and provide assistance to the Government of Afghanistan and its people. The task force is comprised of nearly 9,500 service men and women from all U.S. branches, coalition partners and civilian professionals distributed throughout Afghanistan at nearly 260 Forward Operating Bases, both large and small.