April 9, 2021 | 12:05 pm COVID-19 Updates
COVID-19 is still spreading, even as the vaccine is here. Wear a mask, social distance and stay up to date on New York State's vaccination program.
Get the Facts 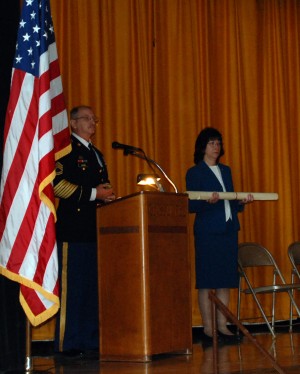 HANCOCK, NY -- Nearly seven years later, a retired 42nd Infantry ‘Rainbow’ Division Soldier kept his promise to say thank you to roughly 35 youngsters who demonstrated concern and ultimately motivated Soldiers during a difficult time. On Sept. 11, 2008, as part of a school-wide 9-11 Remembrance Day ceremony, retired New York Army National Guard Sgt. 1st Class Delbert Higgins said thank you and returned a giant banner sent with care packages to 42nd Infantry Division Soldiers, to the students who created it. The 10th grade students from Hancock Central School sent the 3-by-14 foot banner displaying “Keep up the good work” and signed by the then 3rd graders, faculty and other students. The banner was taped to donations received and distributed to Soldiers working 18-hour shifts supporting rescue and recovery efforts at ‘Ground Zero’ following the World Trade Center attacks in 2001. Higgins, who served a total of 117 days in and around the attack site took notice of the banner and asked to keep it.

“It was a heart felt moment, a deeply moving act of kindness by these children, at a time when one was desperately needed.” Higgins said. “I recognized the name of the school and wanted to say thank you in person, so these kids would know their efforts made a difference.” After our class watched the second plane hit the World Trade Center on TV we wanted to do something to show our support to our nation,” said Ian Begeal, a sophomore. “We came up with the idea of sending packages and we thought those little words of encouragement would help National Guard Soldiers in their jobs." “Having the National Guard bring this banner back is significant. It demonstrates to the students, that their good deed had a monumental impact and how much their efforts meant, said Carol Daddezio, Hancock High School Principal. "It means a lot that the National Guard brought the banner back. They didn’t have to bring it back to us. They could have just destroyed it. Instead, they though enough of us to bring it back," said Thomas Esolen, a sophomore. Following the terrorist attacks on the World Trade Center, hundreds of 42nd Inf. Div. Soldiers moved to what became known as ‘Ground Zero’ and immediately joined the throngs of police, fire and other rescue and response personnel in attempting to remove debris by hand and search for possible survivors. The next day, additional N.Y. Army National Guard Soldiers established a security perimeter around the entire site when the incident commander, a battalion fire chief ordered that the pile be cleared so that he could send in specialized search and rescue teams and in the interest of safety, gain control of the site. Over the next six months, thousands of Rainbow Soldiers maintained security and recovery operations as part of Joint Task Force 42. Higgins, along with hundreds of 42nd Inf. Div. headquarters company personnel coordinated the logistical and personnel requirements of more than 5000 task force members throughout the sustained mission. Along with the banner, the 42nd Inf. Div. presented the Hancock Central School with a 9-11 Remembrance ‘Never Forget’ flag, a signed limited edition portrait, entitled “Never Forget”, which depicts members of the 42nd Inf. Div. preparing for a convoy movement near Tikrit, Iraq during their Operation Iraqi Freedom mobilization. Visible in the backdrop of the scene is the 42nd Inf. Div. main command post, a former presidential palace for Saddam Hussein and a plaque from the Soldiers of the 42nd Inf. Div. and a Division plaque. The items were presented as a token of appreciation on behalf of all Rainbow Soldiers. “The Hancock Central School will be forever grateful to you for returning the banner, reminding our community of the strength of character of our military personnel, and of the tragic events of September 11, 2001,” said Daddezio. “The gifts you presented to our school will become part of our most cherished possessions and will be displayed in a place of significance in the building.”