June 4, 2020 | 2:52 pm Information on Novel Coronavirus
Coronavirus is still spreading in New York. New Yorkers are required to wear a mask and maintain 6 feet distance in public.
Get the Facts 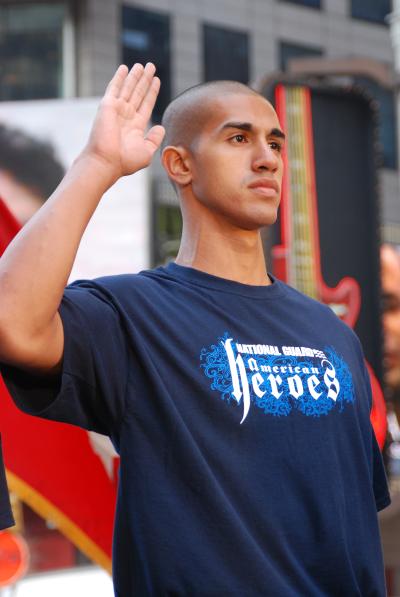 LATHAM -- The New York Army National Guard exceeded its 2008 Fiscal Year recruiting goal, enlisting more than 2,000 new Citizen Soldiers throughout the year and achieving a year-end strength of 10,276 Soldiers across the force.

The fiscal year that began October 1, 2007 and finished on September 30th saw the New York Army National Guard exceed its end strength goal of 10,100 by 1.75 percent.

Taluto joined Secretary of the Army Pete Geren October 1 to mark the end of the Army National Guard, Army Reserve and Active Army recruiting year with an enlistment ceremony in Times Square.

As part of the enlistment ceremony for nine of the Army’s newest Soldiers, the New York National Guard welcomed its newest member, Joseph Rios, 19, from the Bronx.

“Everything the Guard offered outdid every branch in benefits, money,” said Joseph Rios.

Rios departs for basic training with his brother, Javier, 23, on October 22.

"It’s a family tradition for us. We wanted to become something more," said Javier Rios.

The all-volunteer Army achieved the fiscal year’s recruiting goals with 169,500 strong in all three of the Army’s components - Active Army, Army Reserve and the Army National Guard.

The New York Army National Guard was authorized a strength of 10,381for the 2008 fiscal year.

In fiscal 2009 the New York Army National Guard authorized end-strength will increase to 10,440 due to changes within unit structures.

“We’re at the point now where our force is quickly approaching 100 percent strength,” Taluto said, “and I fully expect that we will pass through that mark as we welcome more and more great New Yorkers into the force.”

A robust New York Army National Guard ensures that both manpower and equipment needed to handle state missions are available.

The year also saw a drop in overall attrition in the force from last year’s 21 percent to approximately 19 percent in 2008, a marked improvement in the retention of New York’s Citizen Soldiers. The loss rate had been as high as 24 percent in 2006 following a high period of troop deployments to Iraq for Operation Iraqi Freedom.

Other successes in the force during the year include the reenlistment of approximately three quarters of career Citizen Soldiers. Reenlistments for National Guard careers were 72 percent as some 774 Non-Commissioned Officers made the choice to stay in the New York National Guard.