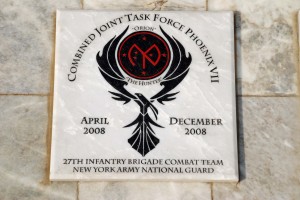 The National Guard’s 372nd birthday on 13 December framed the occasion as the outgoing 27th and the incoming 33rd IBCT prepare to hold the official Transfer of Authority on 19 December.

“I can’t think of a better way for us to mark the birthday of our service than for two historic commands to meet at an important crossroads while serving the nation from a combat zone,” said COL Brian K. Balfe, commander of CJTF-Phoenix VII and the 27th IBCT during a short program inside the Camp Phoenix dining facility following the unveiling of the marble plaque.

“Today we mark the 372nd birthday of America’s National Guard from the opposite side of the world while performing the kind of duty that has always been our hallmark,” he said. “Through our efforts, our example, and our service we are helping to build a nation and the National Guard has been doing exactly that for almost four centuries, when you think about it.”

“Citizen Soldiers have always defended and then helped build our nation to what it is today. During war, we have always fought from the front and when hostilities have ended we helped support the peace and contribute to reconstruction,” he added. “We have always seen ourselves as patriots, liberators and servants -- never as conquerors or aggressors.” The program also featured the unveiling of a memorial inside the dining facility as a tribute to the service members who fell in during CJTF-Phoenix VII, including 8 NYARNG members.

The production and installation of both the plaque and the memorial were overseen by Command Sgt. Maj. David Piwowarski but the design and finishing work came from several volunteers including COL Mike Leonardo, SFC Michael Sirles, SSG Anthony Lechanski, SPC Ray Ramirez, and SSG Linda Nosbisch.

The marble was obtained locally but the computer-generated designs were etched in using a laser engraving machine on base. SSG Nosbisch later hand-painted the Orion patch and the phoenix on the commemorative plaque mounted in Patriot Square.

“We should all remember this Guard birthday because we are celebrating it here in Afghanistan, together, and in fulfillment of everything the Guard has and continues to stand for,” concluded COL Balfe. “I am a Citizen Soldier and am proud to say it.”