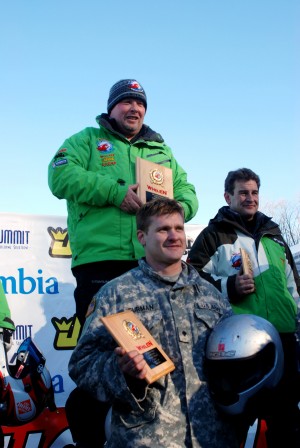 LAKE PLACID, NY (01/06/2009;)-- NASCAR and National Hot Rod Association Dragster drivers are not used to traveling with passengers but, for the past three years, some of the fastest drivers on four wheels have teamed up with combat veterans from the New York Army National Guard for the Bodine Bobsled Challenge.

"I think they’re crazy," joked international motor racing star Boris Said, who won the past two year’s competitions. "I think it’s probably safer in Iraq than it is getting into the back of a bobsled with us. It’s unbelievable that these guys do what they do so that we can have freedom and live in the greatest country in the world. I am glad they have a fun time doing this and we love having them," Said remarked.

The Bodine Bobsled Challenge was conceived by NASCAR legend and former Army National Guardsmen Goeff Bodine to draw attention to his efforts to build world class bobsleds that would make members of the U.S. Olympic and world cup teams competitive in international competition. According to Bodine, the idea for this promotional competition came from a conversation with bobsled television broadcaster John Morgan. "John (Morgan) and I came up with the idea to have NASCAR drivers drive bobsleds and that went really well. Then we asked our friends in the NHRA to come on up. We were hoping to build a lot of awareness for the sport of bobsledding during the years between the Olympics," Bodine said.

But it was Bodine’s renowned spirit of patriotism that led to the inclusion of recruits and combat veterans from the New York Army National Guard. "I am a patriotic guy with red, white and blue running through my veins. As a son of a WWII veteran and a former Army National Guardsmen, I thought we needed some brave people to ride with these drivers and there’s no braver folks than our men and women in the U.S. military," Bodine said.

Three years ago, Bodine approached 26 year Army National Guard veteran and U.S Bobsled National Team Coach Bill Tavares about bringing the Guard into the nationally televised event. "I approached the unit in nearby Saranac Lake to see if I could get them to come over," Tavares said. From there, the request was routed through regional recruiters and the Guard was officially on board.

"The first year, we invited combat veterans just back from Iraq to come up and have a special weekend with their families," stated Guard recruiting officer and three year organizer for the military’s participation in the event, Maj. David Palmieri, who, himself, was the winning brakeman in the first two year’s competition. "For the participants, it was a once-in-a-lifetime experience and the coverage the Guard receives is phenomenal...international," he said.