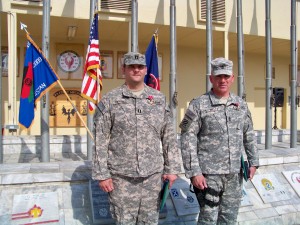 Captain Joseph Merrill from Binghamton, commander of the Ithaca-NY based Company D, 2nd Battalion 108th Infantry and 1st Sgt. James Meltz from Cropseyville, NY also assigned to Company D wee honored for combat actions on 25 and 26 May. The unit was providing security for a long range convoy from Kabul to Kandahar when it was ambushed. Both leaders were credited for “direct actions that lead to the repulsion of enemy forces without the injury or death to US forces.”

“Veterans are people who know the true meaning of courage and what it really takes to keep a nation free and strong,” said Col. Brian K. Balfe, commander of CJTF-Phoenix VII and NY’s 27th Infantry Brigade Combat Team during his remarks. “And yet compassion is also a part of their legacy,” he added.

Both Capt. Merrill and 1st Sgt. Meltz previously served in Iraq with other NY units. In Afghanistan they often provided security and support for humanitarian outreach efforts and civil medical assistance operations.

“This is an honor,” said Merrill who was surprised to receive the award. “That first night was a three hour fight,” he said, adding that his men soundly defeated if not completely destroyed the enemy. “The enemy showed up and stuck around,” said Meltz. “They wanted to play,” he added.

“As a company we will complete over 1100 missions before we finish,” said Merrill. “We figured that after those incidents the enemy took note and for the most part then left us alone,” he said. According to him, the enemy deliberately avoided engaging up-armored humvees from his unit that carried the “phoenix” logo.

CJTF-Phoenix is part of Combined Security Transition Command-Afghanistan with the mission to mentor and train the Afghan National Army and Police, and provide assistance to the Government of Afghanistan and its people. The task force is comprised of nearly 8,700 service men and women from all U.S. branches, coalition partners and civilian professionals distributed at almost 260 Forward Operating Bases and Combat Outposts throughout Afghanistan. Nearly 1700 members of New York’s 27th IBCT were mobilized for the mission. They came from communities across New York.