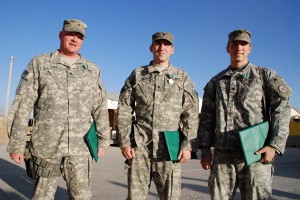 The Soldiers have been serving in the task force Civil Military Operations Office and have been reassigned to duties in embedded training teams with the Afghan National Army.

“I am very proud of the work they have done in support of the mission,” said Lt. Col. Mike Hoblin from New City in Rockland County, whose section overseas humanitarian support and reconstruction projects in Afghan communities through the Commanders Emergency Response Program. “We were able to get a lot done for the Afghan people and these Soldiers made important contributions,” he said.

Specialist Bryant was cited for helping to manage over 40 projects valued at more than $7 million, personally conducting 41 contingency operations and site visits while also providing safety to his team at project locations.

Specialist Archibald was credited for helping to manage the task force humanitarian assistance program, coordinating the timely delivery of shipments throughout Afghanistan to CJTF-Phoenix commands and for his contributions to team security.

Sergeant Cole was cited for his leadership and performance in ensuring the safe completion of over 40 convoys involving section members in support of the many humanitarian and reconstruction projects the team completed since arriving in Afghanistan last April.

CJTF-Phoenix is part of Combined Security Transition Command-Afghanistan with the mission to mentor and train the Afghan National Army and Police, and provide assistance to the Government of Afghanistan and its people. The task force is comprised of nearly 9,500 service men and women from all U.S. branches, coalition partners and civilian professionals distributed at almost 260 Forward Operating Bases and Combat Outposts throughout Afghanistan. Nearly 1700 members of New York’s 27th IBCT were mobilized for the mission. They came from communities across New York.