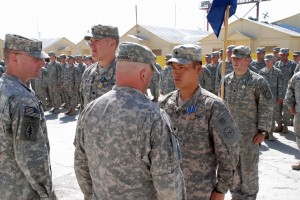 CAMP PHOENIX, KABUL, AFGHANISTAN (20 September 2008) -- Twenty-five more New York Army National Guard Soldiers assigned to a Security Force company of Combined Joint Task Force Phoenix received awards during a ceremonies at Camp Phoenix in Kabul on Saturday 20 September. The awards have been presented as the soldiers prepare to leave having completed their tour of duty.

CJTF-Phoenix is part of Combined Security Transition Command-Afghanistan with the mission to mentor and train the Afghan National Army and Police, and provide assistance to the Government of Afghanistan and its people. The task force is comprised of nearly 9,500 service men and women from all U.S. branches, coalition partners and civilian professionals distributed at almost 260 Forward Operating Bases and Combat Outposts throughout Afghanistan. Nearly 1700 members of New York’s 27th IBCT were mobilized for the mission. They came from communities across New York.