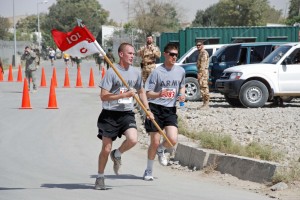 CAMP BLACKHORSE, KABUL PROVINCE, AFGHANISTAN (6 Sept 2008) -- More than 50 U.S. and coalition service members conducted a commemorative 5 kilometer run at Camp Blackhorse in Kabul province, Afghanistan today to remember the victims of the 9-11, 2001 terrorist attacks which was the opening moment of the Global War on Terror.

Participants included members of the New York Army National Guard’s Fighting 69th Infantry, which responded to the attacks on the World Trade Center in Manhattan and are serving in Afghanistan as part of Combined Joint Task Force Phoenix.

The run at Camp Blackhorse takes place on the same day as an annual Commemorative Run back on Long Island, New York. The 9-11 Commemorative Run in New York has grown in popularity since it was organized three years ago by a local chapter of the Marine Corps League and includes service members and family members of 9-11 victims.

Camp Blackhorse is co-located with the Afghan National Army’s Pol-e-charki base, east of Kabul. At 9 a.m. this morning, Soldiers, Sailors, Airmen and Marines along with French soldiers bolted from the starting line in front of the camp and ran a set course through the base that brought them back to the starting position. At the end, runners received certificates and posed for a group photo.

“Three years ago, a good friend of mine -- Mr. Steve Reilly from the Marine Corps League started this run as a fund raiser to memorialize the service members who were killed on 9-11, 2001,” said Camp Blackhorse run organizer Sgt. John O’Dougherty, a former Marine from Valley Stream, Long Island and now a Soldier of the Fighting 69th Infantry based in Bayshore, Long Island.

“People don’t realize there were a lot of reservists that were in the World Trade Center aside from those people in the Pentagon,” said O’Dougherty. “But since then the run has kind of evolved to a rally, if you will, and a whole day of tribute to all Soldiers, Marines, Navy and Airmen who serve everywhere, especially those who have given the ultimate sacrifice,” he said.

“The significance of being here at this time and this place - a lot of us lived 9-11 first hand, especially those of us in New York,” said O’Dougherty. “We went to far too many funerals afterwards and stood outside, burning candles hoping they would find some people (at the World Trade Center site) that they never found.”

“But to come here, where the plot was hatched, where they launched the attack on us to serve here and help the Afghan people get rid of this evil force is a noble cause. It’s very important for us, especially us New Yorkers. It brings things full circle,” he said.

Combined Joint Task Force Phoenix, is part of Combined Security Transition Command-Afghanistan and is comprised of more than 9,500 service members from all four U.S. service branches, coalition partners and civilian professionals with the mission to train and mentor the Afghan National Army and Afghan National Police and support the government of Afghanistan and its people.

Task force personnel are serving as embedded trainers and mentors, security force and logistical support staff and are distributed at more than 240 forward operating bases and combat posts throughout Afghanistan. The New York National Guard’s 27th Infantry Brigade Combat Team took command of the task force on 26 April 2008 and deployed with 1700 troops including many who served at “Ground Zero” and performed considerable home land defense missions following the 9-11, 2001 terrorist attacks.