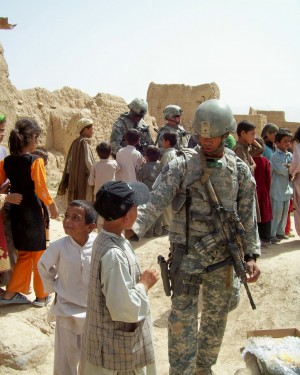 KHATA KHEYL VILLAGE, KABUL PROVINCE, AFGHANISTAN -- Northeast of Kabul in the small village of Khata Kheyl children scrambled and screamed, not in terror, but in joy as Afghan National Army (ANA) soldiers threw out handfuls of candy and crayons.

The unit is serving as part of Combined Joint Task Force Phoenixs Security Forces (SECFOR) which covers the teams that mentor and train the ANA. Members of Company C dont often get to work directly with Afghan soldiers. “That was our second personal experience working with the ANA,” said First Sergeant Ron Patterson, from Gloversville.

The soldiers normally stay very busy providing base and convoy security to Coalition Forces in the Central Area of Operations, which includes the capital City of Kabul. Camp Blackhorse is co-located with Pol-e-charky -- home of the ANA 201st Corps. C Company soldiers were able to make some friends among the ANA prior to the mission. Building relationships helped ensure teamwork would result for the HA mission.

“The soldiers have been wanting something like this because their hometowns have been sending them things to give away,” said Patterson. The unit had already selected the village for its humanitarian effort. Participation by ANA personnel was vital to the overall mission as well as means to efficiently distribute supplies to the residents through the elders.

Captain Boz Mahamat and First Sergeant Bakh Tiar of the 4th Kandak Headquarters led the participating ANA soldiers on the mission. After meeting and coordinating with the village elders, Mahamat was able to establish the location in the village and conditions for the event.

Specialist Cristyan Valentine from the Bronx was impressed. “The ANA took charge of the mission. It wasnt an American thing. They took care of their countrymen,” he said.

When asked about the needs of the villagers Mahamat said, “These people have nothing but the land they live on. If we give them only a pen it is something they need.” In addition to providing pens, pencils, crayons, and notebooks to the children, the ANA handed out cooking oil, rice, and tea to the adults of Khata Kheyl.

“It felt pretty good because we havent done a real HA drop yet. The adults receiving rice, oil, and food was great, it brought a smile to their faces,” Valentine reflected.

While the ANA were preparing to hand out supplies to the villagers, one resident brought his young son to the Americans, asking to see the doctor. Medic Daniel Covel from Marion, NY had come prepared for any contingency and this was certainly not unexpected.

The child had severely burned his leg when he knocked over a pot of scalding hot Chai Tea. Covel quickly assessed the condition of the child and redressed the burn using the proper antibiotics and bandages.

“Xeroform bandages are widely used in hospitals.” The father was clearly very grateful for the treatment of his son,” he said. “He was emotional... I felt like I could have changed that kids life.”

When it was over, First Sergeant Patterson and SECFOR Commander 1st Lieutenant Peter Fluker from Poughkeepsie, NY met with their 4th Kandak comrades to talk over the mission and drank Chai together. They made plans to combine forces and do it again in the future. “Its good to see that they are much like us, just in a different uniform,” said Patterson.