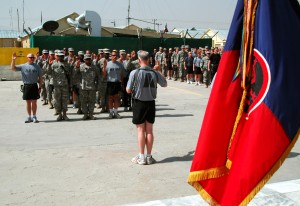 CAMP PHOENIX, KABUL, AFGHANISTAN (July 4, 2008) -- A re-enlistment ceremony of nearly 20 soldiers was the featured moment during a July 4th ceremony held at Camp Phoenix, Kabul this morning. The day began with a 5 Kilometer run with dozens of members of Combined Joint Task Force Phoenix taking to the base track in two groups at 6:15 and 7 a.m.

“On that long ago day in Philadelphia’s Independence Hall, leaders of the day made a bold decision. When they signed their names to the Declaration of Independence, they risked everything to guarantee the rights of ‘Life, Liberty and the Pursuit of Happiness,’” said Col. Brian K. Balfe, commander, CJTF-P, to a formation comprised of soldiers, sailors and airmen.

“The Declaration of Independence could have remained just words on paper had it not been for the strength, and will of the American people and its Army. For the Declaration of Independence did not make America independent from England - the Colonial Army did,” said Balfe. In his remarks, Balfe praised the members of his team for possessing the same spirit of 1776 that America’s forebears displayed.

“We will fight for that independence from terror; and, in fact, we are engaged in that fight at this very moment. All of us here have heard and heeded a call to duty. Not every American responds to this patriotic summons. The nation commends those who do” he said.

For members of Combined Joint Task Force Phoenix in Afghanistan, the 4th of July was just another day in service to the nation. Members enjoyed classic summer picnic fare in the Camp Phoenix dining facility that included a patriotic display featuring the Statue of Liberty, Uncle Sam and decorated cakes.